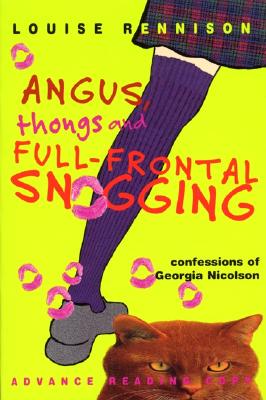 By Louise Rennison
$17.89
Email or call for price.

Angus: My mixed-breed cat, half domestic tabby, half Scottish wildcat. The size of a small Labrador, only mad. Likes to stalk Mr. and Mrs. Next Door's poodle. I used to drag him around on a lead, but, as I explained to Mrs. Next Door, he ate it.

Thongs: Stupid underwear worn by old Swotty Knickers, Lindsay What's the point of them, anyway? They just go up your bum, as far as I can tell.

Full-Frontal Snogging: Kissing with the trimmings, lip to lip, open mouth, tongues...everything (apart from dribble, which is never acceptable). As taught to me by a professional snogger.

In this wildly funny journal of a year in the life of Georgia Nicolson, British author Louise Rennison has perfectly captured the soaring joys and bottomless angust if being a teenager. In the spirit of Bridget Jones' Diary, this fresh, irreverent, and simply hilarious book will leave you laughing out loud. As Georgia would say, it's "Fabbity fab fab!"