The Burglar in the Closet (Bernie Rhodenbarr #2) (Mass Market) 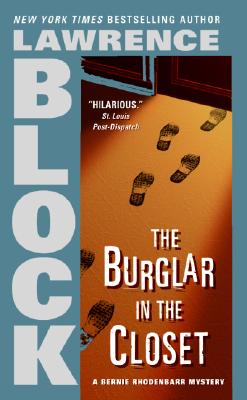 This is book number 2 in the Bernie Rhodenbarr series.

It's hard to ignore someone with his hands in your mouth. Bernie Rhodenbarr's all ears when Dr. Sheldrake, his dentist, starts complaining about his detestable, soon-to-be-ex wife, and happens to mention the valuable diamonds she keeps lying around the apartment. Since Bernie's been known to supplement his income as a bookstore owner with the not-so-occasional bout of high-rise burglary, a couple of nights later he's in the Sheldrake apartment with larceny on his mind -- and has to duck into a closet when the lady of the house makes an unexpected entrance. Unfortunately he's still there when an unseen assailant does Mrs. Sheldrake in . . . and then vanishes with the jewels.

Bernie's got to come out of the closet some time. But when he does, he'll be facing a rap for a murder he didn't commit -- and for a burglary he certainly attempted -- unless he can hunt down the killer who left him hanging.