The Burglar in the Rye (Bernie Rhodenbarr #9) (Mass Market) 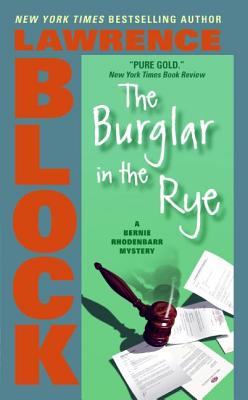 This is book number 9 in the Bernie Rhodenbarr series.

Gulliver Fairborn's novel, Nobody's Baby, changed Bernie Rhodenbarr's life. And now pretty Alice Cottrell, Fairborn's one-time paramour, wants the bookselling, book-loving burglar to break into a room in New York's teeth-achingly charming Paddington Hotel and purloin some of the writer's very personal letters before an unscrupulous agent can sell them. Here's an opportunity to use his unique talents in the service of the revered, famously reclusive author. But when Bernie gets there, the agent is dead . . . and Bernie's wanted for murder. (He really hates when that happens!)

Perhaps it's karmic payback; Bernie did help himself to a ruby necklace on his way out. (But it was lying there. And he is a burglar.) Now he's in even hotter water. And he'll need to use every trick in the book—maybe going so far as to entice the hermitic Fairborn himself out of seclusion—to bring this increasingly twisted plot to a satisfying denouement.