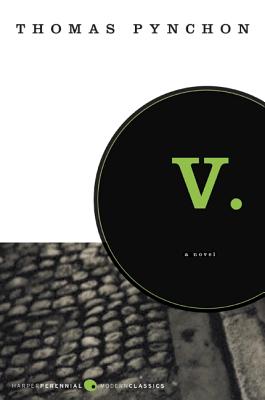 "This work may well stand as one of the very best works of the century." —Atlantic Review

Acclaimed writer Thomas Pynchon's wild, macabre tale of the twentieth century and of two men—one looking for something he has lost, the other with nothing much to lose—and "V.," the unknown woman of the title.

Pynchon's debut novel follows discharged Navy sailor Benny Profane as he reconnects with an eclectic collection of artists in New York known as the "Whole Sick Crew" along with his sidekick Pig Bodine, and the plot of Herbert Stencil, looking to find the woman he knows only as she is described in his father's diary: "V."

Brimming with madcap characters, the novel meanders from New York to Alexandria, Cairo, Paris, Florence, and Africa, and traverses generations. Time magazine raves, "Few books haunt the waking or the sleeping mind, but this is one."

Thomas Pynchon was born in 1937. His books include V, Gravity's Rainbow, Vineland, Mason & Dixon, Against the Day, Inherent Vice, and Bleeding Edge.

“[V.] sails with majesty through caverns measureless to man. What does it mean? Who. finally, is V.? Few books haunt the waking or the sleeping mind, but this is one. Who, indeed?"  — Time

"This work may well stand as one of the very best works of the century." — Atlantic Review

“One of the most interesting productions of our century. . . . Pynchon’s creative imagination is amazing. . . . This work may well stand as one of the very best novels of the century.” — Atlanta Journal-Constitution

“The underpinnings of Pynchon’s satire—the mathematical precision of his settings, the feverishly-sustained atmosphere of his conspiracy—are part of his book’s fascination. But even more exciting to behold here is the scope of a highly-energized mind at work.” — Boston Globe

“Highly original. . . . [Pynchon] has produced as sophisticated and worldly a string of words as anyone has put together in novel form. . . . There is something for everyone here.”  — Chicago Tribune

“The pace is breathless and the spectacle breathtaking . . . . I hope his next book will be every bit as wild, as unrestrained, as inventive, as hilarious, as invigorating as this one. . . . Benny Profane—and Thomas Pynchon—look with a wry eye at our cockeyed world and its people, with a welcome and astringent irony. ”  — Globe and Mail

"It is easier to nail a blob of mercury than to describe this novel by Thomas Pynchon." — Saturday Review