Are These My Basoomas I See Before Me? (Confessions of Georgia Nicolson #10) (Paperback) 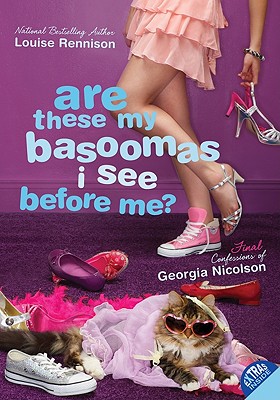 By Louise Rennison
$9.99
Email or call for price.

This is book number 10 in the Confessions of Georgia Nicolson series.

“The final installment in Louise Rennison's delightfully hilarious Georgia Nicolson series is every bit as entertaining as her earlier books. Whether she's being mystified and embarrassed by the adults in her life, getting into trouble at school with the ace gang, or trying to decide between hunky Italian singer Massimo and local boy Dave the Laugh, Georgia is an absolute joy!”
— Carol Schneck, Schuler Books & Music, Okemos, MI

For Georgia, the more things change, the more they stay the same. Just when she thought she was the official one-and-only girlfriend of Masimo, he's walked off into the night with the full hump, leaving Georgia all aloney on her owney-again. All because Dave the Laugh tried to do fisticuffs at dawn with him! Two boys fighting over Georgia? It's almost as romantic as Romeo and Juliet . . . though perhaps a touch less tragic. It's time for Georgia to get to the bottom (oo-er) of this Dave the Laugh spontaneous puckering business once and for all. It's like they always say: If you snog a mate in the forest of red bottomosity and no one is around to see it, is he still a mate? Or is he something more?