What Happens in London (Mass Market) 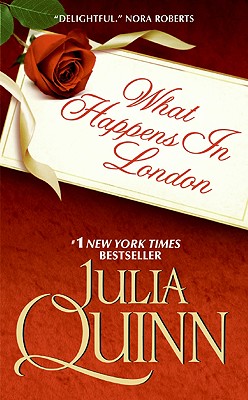 Rumors and Gossip . . . The lifeblood of London

When Olivia Bevelstoke is told that her new neighbor may have killed his fiancée, she doesn't believe it for a second, but, still, how can she help spying on him, just to be sure? So she stakes out a spot near her bedroom window, cleverly concealed by curtains, watches, and waits . . . and discovers a most intriguing man, who is definitely up to something.

Sir Harry Valentine works for the boring branch of the War Office, translating documents vital to national security. He's not a spy, but he's had all the training, and when a gorgeous blonde begins to watch him from her window, he is instantly suspicious. But just when he decides that she's nothing more than an annoyingly nosy debutante, he discovers that she might be engaged to a foreign prince, who might be plotting against England. And when Harry is roped into spying on Olivia, he discovers that he might be falling for her himself . . .

#1 New York Times bestselling author JULIA QUINN began writing one month after graduating from college and, aside from a brief stint in medical school, she has been tapping away at her keyboard ever since. Her novels have been translated into 43 languages and are beloved the world over. A graduate of Harvard and Radcliffe Colleges, she lives with her family in the Pacific Northwest.

Look for BRIDGERTON, based on her popular series of novels about the Bridgerton family, on Netflix.