CIty of Nets: A Portrait of Hollywood in the 1940's (Paperback) 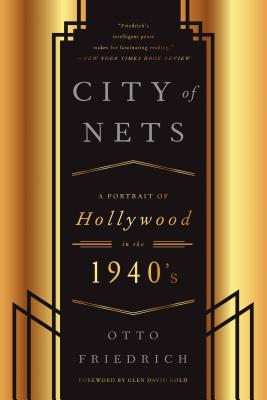 By Otto Friedrich
$19.99
We Can Order This For You

In 1939, fifty million Americans went to the movies every week, Louis B. Mayer was the highest-paid man in the country, and Hollywood produced 530 feature films a year. One decade and five thousand movies later, the studios were faltering. The 1940s became the decade of Hollywood's decline: anticommunist hysteria excommunicated some of its best talent, while a 1948 antitrust consent decree ended many of the business practices that had made the studio system so profitable.

In this masterful work of cultural history, the legendary Otto Friedrich tells the story of Hollywood's heyday and decline in a vivid narrative featuring an all-star cast of the actors, writers, musicians, composers, producers, directors, racketeers, labor leaders, journalists, and politicians who played major parts in the movie capital during the turbulent decade from World War II to the Korean War.

Friedrich draws on sources from celebrity biographies to trade-union history, mingling lively gossip with analysis of Hollywood's seedier business dealings and telling the stories of legendary movies such as Citizen Kane, The Maltese Falcon, Double Indemnity, and All About Eve.

A classic portrait of a special place in a special time, City of Nets gives us a singular behind-the-scenes glimpse into a bygone era that still captivates our imaginations.

Otto Friedrich (1929-1995) was a journalist and cultural historian. A contributing editor at The Saturday Evening Post and Time magazine, he was the author of fourteen books, including Before the Deluge: A Portrait of Berlin in the 1920s.

“What happened in these 10 years is as rich and colorful a story as can be imagined and Friedrich has more than done it justice . . . in a narrative that is often funny and remarkably even-handed--a must for movie buffs and a rewarding read for everyone else.”
— Publishers Weekly

“With its tough humor, profound cynicism, and unerring nose for corruption and hypocrisy, City of Nets offers a distinctly Brechtian vision of Hollywood. . . . By mixing enjoyable gossip about the stars’ personal lives and behind-the-scenes maneuverings with a shrewd look at the film world’s often unsavory industrial underpinnings, Friedrich gives us a much clearer understanding of Hollywood’s reciprocal relationship with American reality.”
— Village Voice