Queen of Bebop: The Musical Lives of Sarah Vaughan (Hardcover) 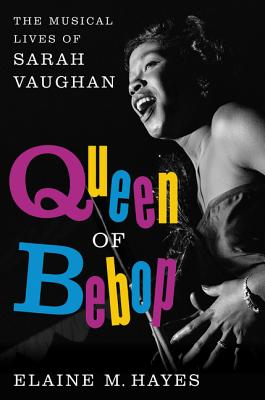 Amazon Best Humor and Entertainment Pick of the Year

Queen of Bebop brilliantly chronicles the life of jazz singer Sarah Vaughan, one of the most influential and innovative musicians of the twentieth century and a pioneer of women’s and civil rights

Sarah Vaughan, a pivotal figure in the formation of bebop, influenced a broad array of singers who followed in her wake, yet the breadth and depth of her impact—not just as an artist, but also as an African-American woman—remain overlooked.

Drawing from a wealth of sources as well as on exclusive interviews with Vaughan’s friends and former colleagues, Queen of Bebop unravels the many myths and misunderstandings that have surrounded Vaughan while offering insights into this notoriously private woman, her creative process, and, ultimately, her genius. Hayes deftly traces the influence that Vaughan’s singing had on the perception and appreciation of vocalists—not to mention women—in jazz. She reveals how, in the late 1940s and early 1950s, Vaughan helped desegregate American airwaves, opening doors for future African-American artists seeking mainstream success, while also setting the stage for the civil rights activism of the 1960s and 1970s. She follows Vaughan from her hometown of Newark, New Jersey, and her first performances at the Apollo, to the Waldorf Astoria and on to the world stage, breathing life into a thrilling time in American music nearly lost to us today.

Equal parts biography, criticism, and good old-fashioned American success story, Queen of Bebop is the definitive biography of a hugely influential artist. This absorbing and sensitive treatment of a singular personality updates and corrects the historical record on Vaughan and elevates her status as a jazz great.

Elaine M. Hayes holds a doctorate in music history and is a recognized expert on Sarah Vaughan and women in jazz. She served as the editor of Earshot Jazz and is a contributing writer to Seattle magazine. She lives in Seattle with her husband and son.

“The early years of Sarah Vaughan’s career coincided with the waning of the swing era, and this biography shows how the change both fuelled and limited her career.” — The New Yorker

“Queen of Bebop explores the hard choices of many a jazz singer when rock ‘n roll began stealing audience focus, relying on a variety of performers to shed light on Vaughan’s mindset. A welcome and well-researched accounting of Vaughan’s life story. ” — NPR.org

“Necessary and exciting. . . . Queen of Bebop models a way of understanding the lives and artistry of jazz musicians — one that establishes their importance and centrality in creating the best that America has offered the world.” — Washington Post

“As a biographer, Hayes strikes a difficult balance between discussing Vaughan’s art and illuminating the tumultuous relationships of which Vaughan rarely spoke.” — Women’s Review of Books

“A lively and moving portrait of the passionate and tenacious jazz singer. Hayes gracefully narrates Vaughan’s life… a detailed look at a fearless singer who constantly moved into new musical territories and left a legacy for younger musicians.” — Publishers Weekly, Starred Review

“Hayes’ interviews with musicians, meticulous jazz history, incisive coverage of the ridiculous publicity campaigns the performer endured, and frank coverage of Vaughan’s emotionally and financially disastrous marriages and her repeated rising from the ashes cohere in a deeply illuminating and unforgettable biography of a true American master.” — Booklist, Starred Review

“Inspiring. . . . traces Vaughan’s life and its intersection of music with race and gender.” — Library Journal

“You may think you know Sarah Vaughan, but this book reveals how much you don’t. Queen of Bebop is a much-needed addition to music scholarship.” — Tammy Kernodle, author of Soul on Soul: The Life and Music of Mary Lou Williams

“A richly contextualized and beautifully researched listening guide for the career of Sarah Vaughn. In respectfully treating Vaughn’s unflagging artistry, drive, and the social justice stakes involved in working within and against the new kinds of hit-making strategies and technologies, Hayes’ treatment lifts us beyond the bop/pop divide.” — Sherrie Tucker, author of Dance Floor Democracy

“With an eye for detail and an ear for nuance, Elaine M. Hayes takes us on Vaughan’s journey from shy church girl to the sassy, masterful “musician’s singer” she became. This book is a must read for fans and scholars of the ‘Divine One’s’ singular contribution to American music.” — Guthrie P. Ramsey, author of The Amazing Bud Powell: Black Genius, Jazz History and the Challenge of Bebop and African American Music

“Hayes brings to life the story of one of America’s most musically gifted, creative, intelligent, and productive women. An enticing and essential read for anyone drawn to the sounds of the inimitable Sarah Vaughan and what it meant to be strong, talented, beautiful, and black in 20th century America.” — Carol Ann Muller, author of Musical Echoes: South African Women Thinking in Jazz