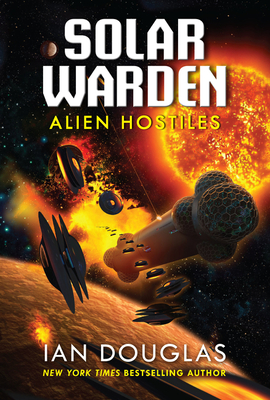 This is book number 2 in the Solar Warden series.

By exposing the sinister Saurians, Navy SEAL Lieutenant Commander Mark Hunter and his team have more than proven themselves. Yet the war between humanity and the intergalactic aliens has only begun—now they must save themselves and all of civilization.

The JSST—the Joint Space Strike Team Hunter has put together from all branches of the U.S. military—is again deployed on board the Earth starcraft carrier Hillenkoetter on a mission to probe a possible historical connection between the Saurians and the Nazi Third Reich. At a planet called Paradies orbiting the red giant star Aldebaran, they discover a long-rumored colony of expatriate Nazis... and the beginnings of a plan to enslave Earth under Nazi—and Saurian—rule.

With Earth at stake, governments deeply compromised, and evil at the door, Solar Warden must fight together to end it all…even if it means sacrificing everything.

Ian Douglas is one of the many pseudonyms for writer William H. Keith, the New York Times bestselling author of the popular military science fiction series The Heritage Trilogy, The Legacy Trilogy, The Inheritance Trilogy, The Star Corpsman series, The Andromedan Dark series, and The Star Carrier series. A former naval corpsman, he lives in Pennsylvania.

“This ambitious series opener from Douglas...throws military sci-fi tropes and time-honored conspiracy theories into a blender to create a bonkers alternate present...Douglas gleefully combines an eclectic mix of conspiracies, among them Roswell Greys, humanoid lizards, and space-faring Nazis, while launching his characters into intergalactic battles with the skillful combat sequences fans well expect.” — Publishers Weekly on Alien Secrets

“Douglas does a good job keeping the action rolling along. The rapid-fire pace is just what some readers are looking for...The end sets up the next adventure in a very good way...There is more action and adventure to come, and that is a good thing.”  — SFRevu on Alien Secrets

“The action is full-blooded and almost nonstop, yet the well-developed background is surprisingly rich and logical.”  — Kirkus Reviews (starred review) on Earth Strike