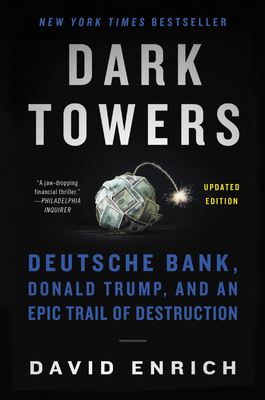 On a rainy Sunday in 2014, a senior executive at Deutsche Bank was found hanging in his London apartment. Bill Broeksmit had helped build the 150-year-old financial institution into a global colossus, and his sudden death was a mystery, made more so by the bank’s efforts to deter investigation. Broeksmit, it turned out, was a man who knew too much.

In Dark Towers, award-winning journalist David Enrich reveals the truth about Deutsche Bank and its epic path of devastation. Tracing the bank’s history back to its propping up of a default-prone American developer in the 1880s, helping the Nazis build Auschwitz, and wooing Eastern Bloc authoritarians, he shows how in the 1990s, via a succession of hard-charging executives, Deutsche made a fateful decision to pursue Wall Street riches, often at the expense of ethics and the law.

Soon, the bank was manipulating markets, violating international sanctions to aid terrorist regimes, scamming investors, defrauding regulators, and laundering money for Russian oligarchs. Ever desperate for an American foothold, Deutsche also started doing business with a self-promoting real estate magnate nearly every other bank in the world deemed too dangerous to touch: Donald Trump. Over the next twenty years, Deutsche executives loaned billions to Trump, the Kushner family, and an array of scandal-tarred clients, including convicted sex offender Jeffrey Epstein.

Dark Towers is the never-before-told saga of how Deutsche Bank became the global face of financial recklessness and criminality—the corporate equivalent of a weapon of mass destruction. It is also the story of a man who was consumed by fear of what he’d seen at the bank—and his son’s obsessive search for the secrets he kept.

David Enrich is the Business Investigations Editor at the New York Times. He previously was the Financial Enterprise Editor of the Wall Street Journal, heading a team of investigative reporters. Before that, he was the Journal’s European Banking Editor, based in London, and a Journal reporter in New York. He has won numerous journalism awards, including the 2016 Gerald Loeb Award for feature writing. His first book, The Spider Network: How a Math Genius and Gang of Scheming Bankers Pulled Off On of The Greatest Scams in History was short-listed for the Financial Times Best Book of the Year award. Enrich grew up in Lexington, Massachusetts, and graduated from Claremont McKenna College in California. He currently lives in New York with his wife and two sons.

“In Dark Towers, David Enrich tells the story of how one of the world’s mightiest banks careened off the rails, threatening everything from our financial system to our democracy through its reckless entanglement with Donald Trump. Darkly fascinating and yet all too real, it’s a tale that will keep you up at night.”
— John Carreyrou, Pulitzer Prize winner and New York Times bestselling author of Bad Blood

“Riveting. … A cracking read. … Devastatingly accurate. …  This is an important book because it reveals how one bank, with questionable business practices to put it mildly, made it possible for Trump to bounce back from multiple bankruptcies, cast himself as a business visionary, and eventually run for president and win.”
— Sunday Times (London)

"A revelatory book about the rise and fall of the world’s biggest bank. … Has all the elements of a page-turning mystery novel"
— Washington Post

"Dark Towers is a devastating tale of a big bank gone bad. ... Enrich draws the reader in by focusing on the people in his story, displaying an Arthur-Miller-like eye for the worn-down Willy Lomans of today's Wall Street."
— Financial Times

"Enrich delivers a master class in financial sleuthing. ... A first-rate read."
— The Guardian

“Exposes chaos and corruption at the bank that holds Trump's secrets.”
— NPR.org

“In this case, ‘epic’ is right - Dark Towers is a mystery, a thriller, a father-son drama. Did I mention Donald Trump? It’s a distinctly American drama of greed, hubris and power that kept me racing to the finish.”
— James B. Stewart, Pulitzer Prize winner and bestselling author of Den of Thieves and Deep State

“Propulsive, richly detailed…Enrich writes with verve…This journalistic tour de force hints that plenty of shocking secrets are yet to be revealed.”
— Publishers Weekly

"The framing of responsibility versus complicity drives Enrich’s subtle and exhaustive exploration of a critical question for today’s politics: Would Donald Trump be president without Deutsche Bank?"
— Barron's

“The surprisingly thrilling story of how Deutsche Bank, which loaned billions to Donald Trump, the Kushner family and Jeffrey Epstein, left a decade of destruction in its wake.”
— Evening Standard (London)