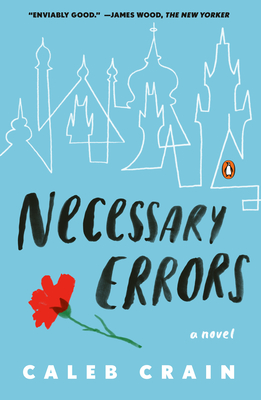 “Necessary Errors is a very good novel, an enviably good one, and to read it is to relive all the anxieties and illusions and grand projects of one’s own youth.”—James Wood, The New Yorker

It’s October 1990. Jacob Putnam is young and full of ideas. He’s arrived a year too late to witness Czechoslovakia’s revolution, but he still hopes to find its spirit, somehow. He discovers a country at a crossroads between communism and capitalism, and a picturesque city overflowing with a vibrant, searching sense of possibility. As the men and women Jacob meets begin to fall in love with one another, no one turns out to be quite the same as the idea Jacob has of them—including Jacob himself.

Necessary Errors is the long-awaited first novel from literary critic and journalist Caleb Crain. Shimmering and expansive, Crain’s prose richly captures the turbulent feelings and discoveries of youth as it stretches toward adulthood—the chance encounters that grow into lasting, unforgettable experiences and the surprises of our first ventures into a foreign world—and the treasure of living in Prague during an era of historic change.

ONE OF THE YEAR'S BEST BOOKS

“Necessary Errors is a very good novel, an enviably good one, and to read it is to relive all the anxieties and illusions and grand projects of one’s own youth.”
—James Wood, The New Yorker

“Ferociously observed. . . . We’re not through with narratives about the Getting of Wisdom, Americans Abroad, Coming of Age, Gay Coming of Age, New Lost Generations. Among such works, a new narrative will be measured against Caleb Crain’s fine book, which will endure as a powerful entry in the great fictional exploration of the meanings of liberation.”
—Norman Rush, The New York Review of Books

“One of the remarkable things about [Crain's] rather remarkable first novel, Necessary Errors, is the way he makes ‘that thing’ — the experience of an idealistic young American abroad — feel newly revelatory and important. . . . He merely writes his characters and settings so well, with such precise attention to physical and psychological detail, that the reader feels introduced to a small world of people and places. . . . Necessary Errors aims to vividly and carefully reconstruct a lost time. . . . Necessary Errors seems exceptional among recent American novels in how smartly it turns over the economic metaphors in so much American thinking.”
—David Haglund, The New York Times

“Evocative. . . . Necessary Errors so completely recaptures the smells and scenes and political conversations and above all the feelings of 1990-1991 Czechoslovakia that I began to actively worry that Mr. Crain was inserting new memories into my brain."
—Matthew Welch, The Wall Street Journal

“A new model for contemporary fiction. . . . It recalls the dreamy pacing of Henry James or Elizabeth Bowen.”
—Jane Hu, Slate

“Post-Iron Curtain Prague is the resonant setting of Caleb Crain’s entertainingly digressive first novel . . . about a young expat coming into an understanding of what he believes and who he loves.”
—Vogue

“Crain wonderfully evokes the novel’s setting in a few deft strokes. He’s a master of the thumbnail character sketch. . . . Line by line, the book is chock-full of masterly word choices and images. . . . On almost every page the reader is rewarded with gems. Necessary Errors heralds the fiction debut of a writer with intelligence and an engaging prose style. The book also serves as a document of a unique cultural moment that has vanished.”
—The New York Times Book Review

“Caleb Crain's debut novel is at times reminiscent of Jane Austen. . . . Necessary Errors is a slow, beautiful look at the process of assembly, destruction, and revision specific to coming of age. It captures the Herculean task of forging one's own definitions of success and authenticity. . . . Crain's first novel is a subtle and magnificent look at a kind of freedom that young, thinking Americans can't find by staying at home.”
—Zeke Turner, Bookforum.com

“A story of considerable power. . . . Throughout the novel, Crain is his own meta-critic, making literary analysis a convincing part of Jacob’s narrative. . . . Crain’s mastery of this subtle kind of dramatic irony — in which we perceive truths that remain hidden from Jacob — is what gives the novel its cumulative emotional heft.”
—The Boston Globe

“Crain nicely captures the feel of two societies perched on the edge of becoming vastly more open—gay culture and the former Eastern Bloc—but where he really shines is in capturing the subtle, omnipresent disorientation of the expat experience.”
—New York magazine

“An endearing and thoughtful look at the expatriate experience.”
—Marie Claire

“There's so much to like here that you'll want to take it slow. . . .  Henry James, but gay and in ’90s Czechoslovakia.”
—Kevin Nguyen, Grantland

“With its characters’ earnest longing for self-definition, the comedy and sorrow of their falling in love with the wrong people and the number of scenes set in bars, the novel certainly evokes a 'Sun Also Rises' vibe. But Crain’s long, elegant sentences, meandering metaphors and omniscient point of view also owe a debt to Henry James. . . . Reading the novel feels like meeting up with friends. . . . One of the book’s best qualities is that evocation of what it’s like to live abroad. . . . Crain has a knack for making drama out of everyday life. . . . Crain does a fantastic job of immersing the reader in the setting, capturing both Prague’s physical details and its atmosphere. He handles the characters with equal depth and heart. They feel simultaneously realistic and storylike.”
—The Kansas City Star

“A sparkling first novel by the literary critic Caleb Crain about youth, ambition, and self-invention in early-90s Prague.”
—Harper's Bazaar

“Crain brings sharp insight and graceful writing to this portrait of the upheavals of youth played out in a country undergoing a historical turning.”
—Page-Turner, NewYorker.com

“Elegant and intellectually robust. . . . Like Prague itself, Jacob will have to remake himself eventually, and Crain makes that need feel essential and bittersweet.”
—Mark Athitakis, Newsday

“Crain reinvents the novel of the innocent abroad in his well-wrought debut.”
—Publishers Weekly

“Crain (American Sympathy) continues his ascendant career with this fully realized debut novel, which delights and surprises with every paragraph. Fans of Ben Lerner’s Leaving the Atocha Station will find themselves similarly enchanted here.”
—Library Journal

“A long-awaited debut by one of the brightest literary and journalistic minds today, Caleb Crain’s novel, Necessary Errors, chronicles a young man’s experience in Czechoslovakia following the Velvet Revolution. He’s missed the bonfires, but the flames haven’t completely died out, and the morning-after light is the right intensity to survey the cultural landscape.”
—The Daily Beast

“A compelling and heartfelt story that captures both the boundless enthusiasm and naïveté of youth.”
—Booklist

“Crain’s stately, wry, and generous first novel breaks the mold. . . . The adventures of American Jacob Putnam in Czechoslovakia right after the Iron Curtain’s fall recall Henry James as much as they do Ben Lerner.”
—Garth Risk Hallberg, The Millions

“I've long admired Caleb Crain’s writing, and Necessary Errors is a tender, immersive, insightful novel. Its author builds with affection a world large and small--of early-nineties Prague, gay nightlife, the hardships of laundry, the penumbra of post-Soviet capitalism, beer versus tea, intense ex-pat friendships, a hamster who lives in a pot, and the hopeful stages of love.”
—Chad Harbach, author of The Art of Fielding

“In its rich and elaborate depictions of a time and a life, of character and growth and pain, and in its psychological curiosity and emotional rigor, Necessary Errors is a rarity—a brave, humane, dignified novel of eros and youth in the shadow of history.”
—Donald Antrim, author of The Verificationist and The Afterlife

“It is rare, and most welcome, to read a first novel with as much elegance, intelligence, humor, and tenderness as Necessary Errors. It is also rare to read any novel that creates this much beauty with such a light but sure touch. An exquisite debut.”
—Stacey D'Erasmo, author of The Sky Below and A Seahorse Year

“Caleb Crain's beautiful novel is a real feat of memory and invention, which captures the feeling of being young, sensitive, and vaguely but intensely ambitious better than anything I know in recent fiction. Everything in Necessary Errors feels both transitory and indelible, and isn’t that the way?”
—Benjamin Kunkel, author of Indecision

“Caleb Crain has written a novel of surpassing intelligence and unexpected beauty about a young American’s year in post-Communist Prague -- and about how we find, and construct, the story of our lives. His great achievement is to make the unfolding of Jacob Putnam’s newfound sexual freedom resonate with the unfolding of Czechs’ new historical freedoms, so these separate arcs seem of a piece. His precision of description, whether of architecture or emotional weather, is enviable; his dialogue both playful and profound. It is rare to read a book of this length and feel that every sentence mattered, rarer still to finish a novel of such intellectual depth and be so moved.”
—Amy Waldman, author of The Submission

“As someone who is often unduly nostalgic about having been in her twenties during the 1990s (though not for as good a reason as having been in Prague during the aftermath of the Velvet Revolution), this novel triggered something like a sense memory. Caleb Crain is remarkable at capturing that time in life when ambition and longing are at once all-consuming and all over the map. I winced in self-recognition more than once -- and marveled at the author's insights more often than that.”
—Meghan Daum, author of My Misspent Youth and Life Would Be Perfect If I Lived In That House

“Caleb Crain describes a young man's and a country's first tastes of freedom with a lucid and matter-of-fact intelligence. Necessary Errors offers an invaluable record of Prague at the beginning of the 1990s in a style that places it among the great novels of Americans abroad. It's The Ambassadors for the generation that came of age with the downfall of the Soviet Union.”
—Marco Roth, author of The Scientists

“I don't know that I’ve ever read a novel that gets down, the way this one does, how it felt to be an American and a gay man at the end of the Cold War--so exiled from the country you grew up in that you go abroad to make a new world. Caleb Crain’s Necessary Errors is an adventure of the head and heart. His hero, Jacob, turns to the cafes, bedrooms, and libraries of newly free Eastern Europe, an American in search of a European Bildungsroman, in search of love and possibility both.”
—Alexander Chee, author of Edinburgh

“Youth and innocence--remember them?  Caleb Crain’s Necessary Errors stabs the heart with the story of Jacob Putnam's sentimental education in Prague, and reminds us that to be young is to live abroad in a fallen empire where the talk goes on all night, the dumplings are sliced thick, and blue jeans are rare and too expensive.  Pick this novel up and you won't forget it.”
—Benjamin Anastas, author of Too Good to Be True

“A coming-of-age story set against a unique and foreign backdrop, Necessary Errors is a poignant work of fiction grounded in history.”
—The Brooklyn Daily Eagle