Five Came Back: A Story of Hollywood and the Second World War (Paperback) 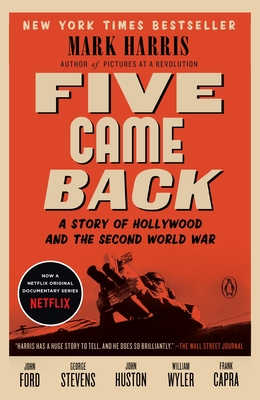 Now a Netflix original documentary series, also written by Mark Harris: the extraordinary wartime experience of five of Hollywood's most important directors, all of whom put their stamp on World War II and were changed by it forever

Here is the remarkable, untold story of how five major Hollywood directors—John Ford, George Stevens, John Huston, William Wyler, and Frank Capra—changed World War II, and how, in turn, the war changed them. In a move unheard of at the time, the U.S. government farmed out its war propaganda effort to Hollywood, allowing these directors the freedom to film in combat zones as never before. They were on the scene at almost every major moment of America’s war, shaping the public’s collective consciousness of what we’ve now come to call the good fight. The product of five years of scrupulous archival research, Five Came Back provides a revelatory new understanding of Hollywood’s role in the war through the life and work of these five men who chose to go, and who came back.

“A tough-minded, information-packed and irresistibly readable work of movie-minded cultural criticism. Like the best World War II films, it highlights marquee names in a familiar plot to explore some serious issues: the human cost of military service, the hypnotic power of cinema and the tension between artistic integrity and the exigencies of war.” --The New York Times

Mark Harris is the author of Pictures at a Revolution: Five Movies and the Birth of the New Hollywood, which was a New York Times notable book of the year and was named one of the ten best nonfiction books of the decade by Salon. An editor at large at Entertainment Weekly, a columnist for Grantland, and a contributing editor at New York Magazine, he has written about pop culture and film history for many other publications, including The New York Times, The Washington Post, Time, and GQ. A graduate of Yale University, Harris lives in New York City with his husband, Tony Kushner.

“Mr. Harris has a huge story to tell, and he does so brilliantly, maintaining suspense in a narrative whose basic outcome will be known ahead of time. Five Came Back is packed with true stories that, according to the proverb, are stranger than fiction. Mr. Harris's story of five particular directors at one particular moment of history tells us much about the motion-picture industry, about the nature of filmmaking and, more generally, about the relation of art to the larger demands of society . . . [A]n inspirational, if cautionary, tale of the triumph of the individual over the collective, of personal vision over groupthink, and ultimately of art over propaganda.” --The Wall Street Journal

“Five Came Back . . . is one of the great works of film history of the decade.” --Slate

“A tough-minded, information-packed and irresistibly readable work of movie-minded cultural criticism. Like the best World War II films, it highlights marquee names in a familiar plot to explore some serious issues: the human cost of military service, the hypnotic power of cinema and the tension between artistic integrity and the exigencies of war.” --The New York Times

“Five Came Back, by Mark Harris, has all the elements of a good movie: fascinating characters, challenges, conflicts and intense action. This is Harris’s second brilliant book about movies. Both books demonstrate meticulous research and exceptional skill at telling intersecting and overlapping stories with clarity and power.” --The Washington Post

“Definitive. In these lush, informative pages, Harris indeed reaffirms his commitment to writing the old-fashioned way, the way that evinces profound respect for his craft, his material and his readers.” --Cleveland Plain Dealer

“It’s hardly news that the movies affect and are affected by the broader canvas of popular culture and world history, but Harris—perhaps more successfully than any other writer, past or present—manages to find in that symbiotic relationship the stuff of great stories. Every chapter contains small, priceless nuggets of movie history, and nearly every page offers an example of Harris’ ability to capture the essence of a person or an event in a few, perfectly chosen words. Narrative nonfiction that is as gloriously readable as it is unfailingly informative.” --Booklist (starred)

“A comprehensive, clear-eyed look at the careers of five legendary directors who put their Hollywood lives on freeze-frame while they went off to fight in the only ways they knew how. As riveting and revealing as a film by an Oscar winner.” --Kirkus Reviews

“Insightful. Harris pens superb exegeses of the ideological currents coursing through this most political of cinematic eras, and in the arcs of his vividly drawn protagonists…we see Hollywood abandoning sentimental make-believe to confront the starkest realities.” --Publishers Weekly

“Harris surpasses previous scholarship on the directors who are the focus here… This well-researched book is essential for both film enthusiasts and World War II aficionados.” --Library Journal