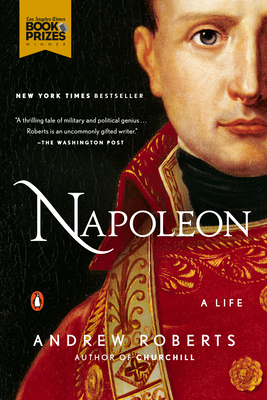 The definitive biography of the great soldier-statesman by the acclaimed author of Churchill and The Last King of America—winner of the LA Times Book prize, finalist for the Plutarch prize, winner of the Fondation Napoleon prize and a New York Times bestseller

“A thrilling tale of military and political genius… Roberts is an uncommonly gifted writer.” —The Washington Post

Austerlitz, Borodino, Waterloo: his battles are among the greatest in history, but Napoleon Bonaparte was far more than a military genius and astute leader of men. Like George Washington and his own hero Julius Caesar, he was one of the greatest soldier-statesmen of all times.

Andrew Roberts’s Napoleon is the first one-volume biography to take advantage of the recent publication of Napoleon’s thirty-three thousand letters, which radically transform our understanding of his character and motivation. At last we see him as he was: protean multitasker, decisive, surprisingly willing to forgive his enemies and his errant wife Josephine. Like Churchill, he understood the strategic importance of telling his own story, and his memoirs, dictated from exile on St. Helena, became the single bestselling book of the nineteenth century.

An award-winning historian, Roberts traveled to fifty-three of Napoleon’s sixty battle sites, discovered crucial new documents in archives, and even made the long trip by boat to St. Helena. He is as acute in his understanding of politics as he is of military history. Here at last is a biography worthy of its subject: magisterial, insightful, beautifully written, by one of our foremost historians.

Andrew Roberts is the bestselling author of The Storm of War, Masters and Commanders, Napoleon and Wellington, and Waterloo. A Fellow of the Napoleonic
Institute, he has won many prizes, including the Wolfson History Prize and the British Army Military Book Award, writes frequently for The Wall Street Journal,
and has written and presented a number of popular documentaries. He lives in New York City.

“An epically scaled new biography . . . Roberts brilliantly conveys the sheer energy and presence of Napoleon the organizational and military whirlwind who, through crisp and incessant questioning, sized up people and problems and got things done. . . . His dynamism shines in Roberts’s set-piece chapters on major battles like Austerlitz, Jena, and Marengo, turning visionary military maneuvers into politically potent moments.”
—The New York Times Book Review

“Roberts is a masterly storyteller. . . . I would recommend his book to anyone seeking an accessible chronicle, rich in anecdote, of Napoleon’s fantastic story.”
—Max Hastings, The Wall Street Journal

“With his customary flair and keen historical eye, Andrew Roberts has delivered the goods again. This is the best one volume biography of Napoleon in English for the last four decades. A tour de force that belongs on every history lover’s bookshelf!”
—Jay Winik, bestselling author of The Great Upheaval and April 1865

“Is another long life of Napoleon really necessary? On three counts, the answer given by Andrew Roberts’s impressive book is an emphatic yes. The most important is that this is the first single-volume general biography to make full use of the treasure trove of Napoleon’s 33,000-odd letters, which began being published in Paris only in 2004. Second, Roberts, who has previously written on Napoleon and Wellington, is a masterly analyst of the French emperor’s many battles. Third, his book is beautifully written and a pleasure to read.”
—The Economist

“Napoleon remade France and much of Europe in his fifteen years in power and proved himself one of history’s greatest military commanders. Roberts’s access to Napoleon’s thirty-three thousand letters, only recently available, allowed him to create a fully human portrait of this larger-than-life figure.”
—The Wall Street Journal, Holiday Gift Guide

“A huge, rich, deep, witty, humane and unapologetically admiring biography that is a pleasure to read. The Napoleon painted here is a whirlwind of a man—not only a vigorous and supremely confident commander, but an astonishingly busy governor, correspondent and lover, too. . . . To dive into Roberts’s new book is to understand—indeed, to feel—why this peculiarly brilliant Corsican managed for so long to dazzle the world.”
—Dan Jones, The Telegraph

“Roberts in his Napoleon achieves the near impossible by writing on this extravagantly well-covered subject with a freshness and excitement that makes readers think they have stumbled on something entirely new.”
—Philip Ziegler, The Spectator, Books of the Year

“Truly a Napoleonic triumph of a book, elegantly written, epic in scale, novelistic in detail, irresistibly galloping with the momentum of a cavalry charge, as comfortable on the battlefield as in the bedroom. Here, at last, is the full biography.”
—Simon Sebag Montefiore, Evening Standard, Books of the Year

“Magnificent . . . Roberts’s fine book encompasses all the evidence to give a brilliant portrait of the man. The book, as it needs to be, is massive, yet the pace is brisk and it’s never overwhelmed by the scholarly research, which was plainly immense.”
—Mail on Sunday

“Roberts not only brings the Napoleon story up to date but, with new evidence from the archives and an original spin on the present, makes a compelling case for why we should all read anew about the little Corsican in the 21st century.”
—The Observer (London)

“Magisterial and beautifully written . . . A richly detailed and sure-footed reappraisal of the man, his achievements—and failures—and the extraordinary times in which he lived.”
—Standpoint

“A definitive account that dispels many of the myths that surrounded Napoleon from his lifetime to the present day.”
—Publishers Weekly

“A compelling biography of the preeminent French general that stands apart from the rest, owing to the author’s thoroughness, accuracy, and attention to detail. Roberts relies on his military expertise, Napoleon’s surviving correspondence (33,000 items in all), and exhaustive on-site studies of French battlegrounds. . . . This voluminous work is likely to set the standard for subsequent accounts.”
—Library Journal (starred review)