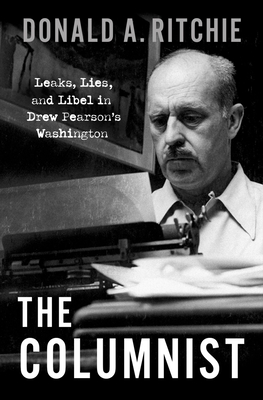 Long before Wikileaks and social media, the journalist Drew Pearson exposed to public view information that public officials tried to keep hidden. A self-professed keyhole peeper, Pearson devoted himself to revealing what politicians were doing behind closed doors. From 1932 to 1969, his
daily Washington Merry-Go-Round column and weekly radio and TV commentary broke secrets, revealed classified information, and passed along rumors based on sources high and low in the federal government, while intelligence agents searched fruitlessly for his sources. For forty years, this syndicated columnist and radio and television commentator called public officials to account and forced them to confront the facts. Pearson's daily column, published in more than 600 newspapers, and his weekly radio and television commentaries led to the censure of two US
senators, sent four members of the House to prison, and undermined numerous political careers. Every president from Franklin Roosevelt to Richard Nixon--and a quorum of Congress--called him a liar. Pearson was sued for libel more than any other journalist, in the end winning all but one of the
cases. Breaking secrets was the heartbeat of Pearson's column. His ability to reveal classified information, even during wartime, motivated foreign and domestic intelligence agents to pursue him. He played cat and mouse with the investigators who shadowed him, tapped his phone, read his mail, and planted
agents among his friends. Yet they rarely learned his sources. The FBI found it so fruitless to track down leaks to the columnist that it advised agencies to simply do a better job of keeping their files secret. Drawing on Pearson's extensive correspondence, diaries, and oral histories, The
Columnist reveals the mystery behind Pearson's leaks and the accuracy of his most controversial revelations.

Donald A. Ritchie is Historian Emeritus of the US Senate. At the Senate he conducted an oral history program and edited for publication the transcripts of the previously closed hearings of Senator Joseph McCarthy. A former president of the Oral History Association, he also served on the council ofthe American Historical Association and as a delegate to the American Council of Learned Societies. His books include Press Gallery: Congress and the Washington Correspondents, Doing Oral History, American Journalists: Getting the Story; Reporting from Washington: The History of the WashingtonPress Corps; Electing FDR: The New Deal Election of 1932, and The U.S. Congress: A Very Short Introduction.