Taming the Megabanks: Why We Need a New Glass-Steagall ACT (Hardcover) 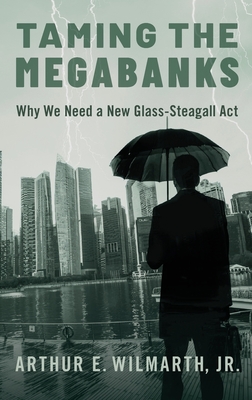 Banks were allowed to enter securities markets and become universal banks during two periods in the past century - the 1920s and the late 1990s. Both times, universal banks made high-risk loans and packaged them into securities that were sold as safe investments to poorly-informed investors. Both times, universal banks promoted unsustainable booms that led to destructive busts - the Great Depression of the early 1930s and the Global Financial Crisis of 2007-09. Both times, governments were forced to arrange costly bailouts of universal banks. Congress passed the Glass-Steagall Act of 1933 in response to the Great Depression. The Act broke up universal banks and established a decentralized financial system composed of three separate and independent sectors: banking, securities, and insurance. That system was stable and successful for over four decades until the big-bank lobby persuaded regulators to open loopholes in Glass-Steagall during the 1980s and convinced Congress to repeal it in 1999. Congress did not adopt a new Glass-Steagall Act after the Global Financial Crisis. Instead, Congress passed the Dodd-Frank Act. Dodd-Frank's highly technical reforms tried to make banks safer but left in place a dangerous financial system dominated by universal banks. Universal banks continue to pose unacceptable risks to financial stability and economic and social welfare. They exert far too much influence over our political and regulatory systems because of their immense size and their undeniable "too-big-to-fail" status. In Taming the Megabanks, Arthur Wilmarth argues that we must again separate banks from securities markets to avoid another devastating financial crisis and ensure that our financial system serves Main Street business firms and consumers instead of Wall Street bankers and speculators. Wilmarth's comprehensive and detailed analysis demonstrates that a new Glass-Steagall Act would make our financial system much more stable and less likely to produce boom-and-bust cycles. Giant universal banks would no longer dominate our financial system or receive enormous subsidies. A more decentralized and competitive financial system would encourage banks and securities firms to fulfill their proper roles as servants - not masters - of Main Street businesses and consumers.

Arthur E. Wilmarth, Jr. is Professor of Law at the George Washington University Law School. Wilmarth is the co-editor with Lawrence E. Mitchell of The Panic of 2008: Causes, Consequences, and Implications for Reform and a member of the international advisory board of the Journal of BankingRegulation. He has testified before committees of the U.S. Congress and the California legislature on financial regulatory issues.