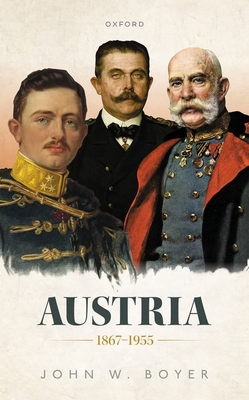 Austria 1867-1955 connects the political history of German-speaking provinces of the Habsburg Empire before 1914 (Vienna and the Alpine Lands) with the history of the Austrian Republic that emerged in 1918. John W. Boyer presents the case of modern Austria as a fascinating example of democratic nation-building. The construction of an Austrian political nation began in 1867 under Habsburg Imperial auspices, with the German-speaking bourgeois Liberals defining the concept of a political people (Volk) and giving that Volk a constitution and a liberal legal and parliamentary order to protect their rights against the Crown. The decades that followed saw the administrative and judicial institutions of the Liberal state solidified, but in the 1880s and 1890s the membership of the Volk exploded to include new social and economic strata from the lower bourgeoisie and the working classes. Ethnic identity was not the final structuring principle of everyday politics, as it was in the Czech
lands. Rather social class, occupational culture, and religion became more prominent variables in the sortition of civic interests, exemplified by the emergence of two great ideological parties, Christian Socialism and Social Democracy in Vienna in the 1890s. The war crisis of 1914/1918 exploded the Empire, with the Crown self-destructing in the face of military defeat, chronic domestic unrest, and bitter national partisanship. But this crisis also accelerated the emergence of new structures of democratic self-governance in the German-speaking Austrian lands, enshrined in the republican Constitution of 1920. Initial attempts to make this new project of democratic nation-building work failed in the 1920s and 1930s, culminating in the catastrophe of the 1938 Nazi occupation. After 1945 the surviving legatees of the Revolution of 1918 reassembled under the four-power Allied occupation, which fashioned a shared political culture which proved sufficiently flexible to accommodate intense
partisanship, resulting, by the 1970s, in a successful republican system, organized under the aegis of elite democratic and corporatist negotiating structures, in which the Catholics and Socialists learned to embrace the skills of collective but shared self-governance.

John W. Boyer, Martin A. Ryerson Distinguished Service Professor of History, University of Chicago John W. Boyer is the Martin A. Ryerson Distinguished Service Professor in History at the University of Chicago and an Editor of the Journal of Modern History. A specialist in Central European history, Boyer has written three books in the field of Austrian political and social history, most recently Karl Lueger (1844-1910): Christlichsoziale Politik als Beruf, published in 2010. In 2015 he published The University of Chicago. A History. Boyer has received the Cross of Honor for Science and Art, First Class, from the Republic of Austria, in recognition of his scholarly work on the Habsburg Empire. He is also a Corresponding Member of the Austrian Academy of Sciences. Since 1992 he has served as Dean of the College at the University of Chicago.