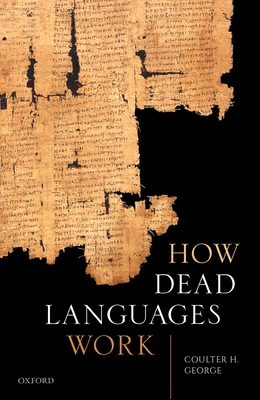 What could Greek poets or Roman historians say in their own language that would be lost in translation? After all, different languages have different personalities, and this is especially clear with languages of the ancient and medieval world. This volume celebrates six such languages - Ancient Greek, Latin, Old English, Sanskrit, Old Irish, and Biblical Hebrew - by first introducing readers to their most distinctive features, then showing how these linguistic traits play out in short excerpts from actual ancient texts. It explores, for instance, how Homer's Greek shows signs of oral composition, how Horace achieves striking poetic effects through interlaced word order in his Latin, and how the poet of Beowulf attains remarkable intensity of expression through the resources of Old English. But these are languages that have shared connections as well. Readers will see how the Sanskrit of the Rig Veda uses words that come from roots found also in English, how turns of phrase
characteristic of the Hebrew Bible found their way into English, and that even as unusual a language as Old Irish still builds on common Indo-European linguistic patterns. Very few people have the opportunity to learn these languages, and they can often seem mysterious and inaccessible: drawing on a lucid and engaging writing style and with the aid of clear English translations throughout, this book aims to give all readers, whether scholars, students, or interested novices, an aesthetic appreciation of just how rich and varied they are.

Coulter H. George, Professor of Classics, University of Virginia Coulter H. George is Professor of Classics at the University of Virginia. The author of Expressions of Agency in Ancient Greek (CUP, 2005) and Expressions of Time in Ancient Greek (CUP, 2014), he has also taught at Rice University and was a Junior Research Fellow at Trinity College, Cambridge.