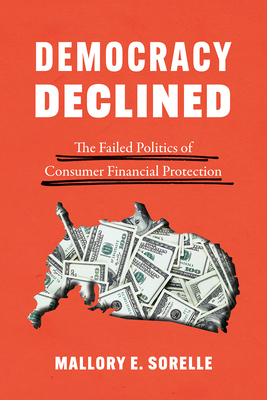 As Elizabeth Warren memorably wrote, “It is impossible to buy a toaster that has a one-in-five chance of bursting into flames and burning down your house. But it is possible to refinance an existing home with a mortgage that has the same one-in-five chance of putting the family out on the street.” More than a century after the government embraced credit to fuel the American economy, consumer financial protections in the increasingly complex financial system still place the onus on individuals to sift through fine print for assurance that they are not vulnerable to predatory lending and other pitfalls of consumer financing and growing debt.
In Democracy Declined, Mallory E. SoRelle argues that the failure of federal policy makers to curb risky practices can be explained by the evolution of consumer finance policies aimed at encouraging easy credit in part by foregoing more stringent regulation. Furthermore, SoRelle explains how angry borrowers’ experiences with these policies teach them to focus their attention primarily on banks and lenders instead of demanding that lawmakers address predatory behavior. As a result, advocacy groups have been mostly unsuccessful in mobilizing borrowers in support of stronger consumer financial protections. The absence of safeguards on consumer financing is particularly dangerous because the consequences extend well beyond harm to individuals—they threaten the stability of entire economies. SoRelle identifies pathways to mitigate these potentially disastrous consequences through greater public participation.

Mallory E. SoRelle is assistant professor of public policy at the Sanford School of Public Policy at Duke University and has contributed to popular politics and current events blogs like the Washington Post's Monkey Cage and Scholars Strategy Network.

“Democracy Declined is an elegant and timely book engaged with the compelling public policy issue of credit access and its regulation. SoRelle superbly integrates insights from historical institutional arguments in political science with a range of methods, including archival and experimental. Written in fluid, clear prose, this is an important and original work which will be widely read and cited."
— Desmond King, University of Oxford

“Democracy Declined offers an original, incisive, and richly-documented analysis of the political consequences of a consumption-driven American economy built on a foundation of consumer credit. Combining rigorous analyses of multiple and rich sources of evidence with well-founded proposals for alternative ways forward, SoRelle demonstrates that the absence of a more vigorous consumer financial protection regime in the United States is no accident but rather the path-dependent effects of New Deal-era policies that have foiled attempts at any regulation that might threaten the flow of credit. SoRelle’s meticulously researched, engaged, and insightful book is a major and much-needed contribution to our understanding of this crucial but long-overlooked feature of the American political economy and of the history and politics of credit, social policy, and the welfare state more broadly.”

"[Mallory SoRelle] argues that over the past 60 years policymakers have largely placed the responsibility for protecting consumers from harmful credit products squarely on the shoulders of individuals rather than the government — a decision largely at odds with other developed nations."
— American Banker

"SoRelle argues that the failure of US federal policymakers to curb risky practices can be explained by the evolution of consumer finance policies aimed at encouraging easy credit in part by foregoing more stringent regulation. However. . . borrowers misplace their objections by focusing on banks and lenders instead of on the need for legal change. She concludes that as a result, advocacy groups have been mostly unsuccessful in mobilizing borrowers in support of stronger consumer financial protections, to their own detriment and that of the economy."
— Law and Social Inquiry