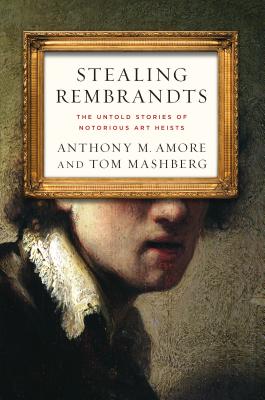 Anthony M. Amore and Tom Mashberg's Stealing Rembrandts is a spellbinding journey into the high-stakes world of art theft

Today, art theft is one of the most profitable criminal enterprises in the world, exceeding $6 billion in losses to galleries and art collectors annually. And the masterpieces of Rembrandt van Rijn are some of the most frequently targeted.

In Stealing Rembrandts, art security expert Anthony M. Amore and award-winning investigative reporter Tom Mashberg reveal the actors behind the major Rembrandt heists in the last century. Through thefts around the world - from Stockholm to Boston, Worcester to Ohio - the authors track daring entries and escapes from the world's most renowned museums. There are robbers who coolly walk off with multimillion dollar paintings; self-styled art experts who fall in love with the Dutch master and desire to own his art at all costs; and international criminal masterminds who don't hesitate to resort to violence. They also show how museums are thwarted in their ability to pursue the thieves - even going so far as to conduct investigations on their own, far away from the maddening crowd of police intervention, sparing no expense to save the priceless masterpieces.

Stealing Rembrandts is an exhilarating, one-of-a-kind look at the black market of art theft, and how it compromises some of the greatest treasures the world has ever known.

Anthony M. Amore is the head of security at the Isabella Stewart Gardner Museum and contributes to the Boston Herald and The Huffington Post. He is the co-author of Stealing Rembrandts. He serves as trustee of the Association for Research into Crimes against Art and lectures widely on art crime.

Tom Mashberg is an award-winning investigative reporter and the former Sunday editor for the Boston Herald. He is the co-author of Stealing Rembrandts. During his 30-year career he has reported for The New York Times and The Boston Globe, as well as writing for Vanity Fair and many other publications. He was called “the quintessential newspaperman” by FOX-TV’s America’s Most Wanted.

“[The authors] interview some of today's highest-profile art thieves . . . The most absorbing part of the entire book is the verbatim testimony from Myles J. Connor about how he cased museums, identified security weaknesses, planned his operations, implemented them, and sought to profit from the art he stole.” —The Boston Globe

“Anthony Amore and Tom Mashberg have a textured feel for Rembrandt's work.” —The Wall Street Journal

“A quick and entertaining read.” —The Christian Science Monitor

“This is a terrific book, and excellently researched.” —ARTnews

“A detailed look at numerous robberies targeting works by the great Dutch master over the past century. Combining impressive shoe-leather reporting skills with solid art-world knowledge, this fascinating book debunks many myths about museum heists while providing vivid profiles of the criminals and their motives . . . As Amore and Mashberg show, stealing a Rembrandt seldom pays off for the thieves but makes the world at large infinitely poorer. With hard facts and a cleareyed perspective, this book sets the record straight.” —Associated Press

“The authors smash myth after myth, many of them the result of unrealistic movies of the James Bond variety ... An interesting mish-mash of everything related to the thievery of valuable art.” —Kirkus Reviews

“Art history meets C.S.I. in this account of the theft of works by Rembrandt Harmenszoon van Rijn, the most prolific master painter of the Dutch Golden Age. Amore and Mashberg narrate heists ranging from noir to farce, weaving in details about the historical relevance of each work and background on the artist . . . The authors convey the importance of Rembrandt's works as historical and cultural touchstones and argue that art theft is a 'crime against all of us.'” —Publishers Weekly

“A fast-paced and engrossing exposé of the shady underbelly of the art world.” —Robert K. Wittman, New York Times bestselling author of Priceless: How I Went Undercover to Rescue the World's Stolen Treasures

“You don't have to appreciate art -- just entertaining true-crime stories -- to enjoy 'Stealing Rembrandts.' In this fast-moving account of some of the most daring art heists ever, art security expert Anthony Amore introduces a colorful real-life cast of sticky-fingered art-lovers you won't soon forget, especially the next time you find yourself in a museum checking out an exhibit of Old Masters, or new.” —Howie Carr, bestselling author of Hitman and The Brothers Bulger

“Authors Amore & Mashberg are the Sherlock Holmes and Dr. Watson of the art world. True masters in their own right, they provide an unvarnished look at some of history's most notorious art heists, separating fact from popular fiction and defeating the notion that art theft is a victimless crime. On the contrary, Stealing Rembrandts is proof that plundering art for profit is more dangerous than we could ever have imagined.” —Casey Sherman, bestselling author of Search for the Strangler, Bad Blood and The Finest Hours

“People often ask me, 'Why would anyone steal a high-profile piece of art? What could they do with it?' If you want answers read Stealing Rembrandts. This finely crafted chronicle of a century of Rembrandt thefts gives the reader rare and intimate access to the strange milieu of the art heist.” —Rebecca Dreyfus,

“Stealing Rembrandts offers a rare inside look into a world few of us know beyond headlines and Hollywood. By weaving together Rembrandt's own story with exclusive interviews and insights into the men who have stolen his masterpieces, authors Anthony M. Amore and Tom Mashberg do a masterful job of connecting the artist and his thieves across the centuries. Along the way, they explode myths and reveal the true nature of the criminals and their crimes. Most of us can't hope to hang a Rembrandt on our walls, but the good news is that we can eagerly add this book to our collections.” —Mitchell Zuckoff, author of Lost in Shangri-La

“Stealing Rembrandts is thoroughly researched and filled with memorable characters. It is a fascinating and entertaining read.” —Milton Esterow, publisher of ARTnews