The Letters of Cole Porter (Hardcover) 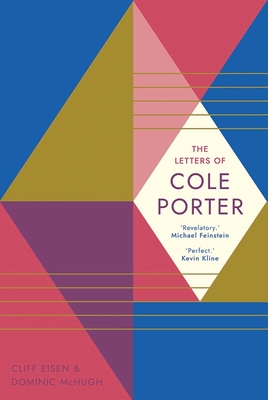 From Anything Goes to Kiss Me, Kate, Cole Porter left a lasting legacy of iconic songs including "You're the Top," "Love For Sale," and "Night and Day." Yet, alongside his professional success, Porter led an eclectic personal life which featured exuberant parties, scandalous affairs, and chronic health problems. This extensive collection of letters (most of which are published here for the first time) dates from the first decade of the twentieth century to the early 1960s and features correspondence with stars such as Irving Berlin, Ethel Merman, and Orson Welles, as well as his friends and lovers.

Cliff Eisen and Dominic McHugh complement these letters with lively commentaries that draw together the loose threads of Porter’s life and highlight the distinctions between Porter’s public and private existence. This book reveals surprising insights into his attitudes toward Hollywood and Broadway, and toward money, love, and dazzling success.

Cliff Eisen is professor of music history at King’s College London. Dominic McHugh is reader in musicology at the University of Sheffield and a leading authority on Broadway.

“[A] gorgeous book”—Roger Lewis, Daily Mail (Book of the Week)

“[An] extensive commentary”—Clive Davis, The Times

“an intimidating marvel of scholarship. . . . The Letters of Cole Porter amounts to the last word [on Porter], a work as disjointed and delightful as any of Porter’s unforgettable songs.”—David Kirby, Washington Post

“Porter’s ghost could not ask for better care than he has been given in The Letters of Cole Porter . . . . Laid out with a meticulous scholarly apparatus, as though this were the correspondence of Grover Cleveland, every turn in the songwriter’s story is deep-dived for exact chronology, and every name casually dropped by Porter gets a worried, explicatory footnote.”—Adam Gopnik, New Yorker

“Cole Porter was considered one of the greatest songwriters of his time, and the originality, wit, and artistry, of both his music and his lyrics, have lost none of their lustre in the ensuing years. Yet his personal life has been clouded in mystery and gossip, much of it exaggerated or simply untrue. This new book offers the perfect solution: by reproducing a rich selection of Porter's letters from across his life and activities, the editors have allowed him to speak in his own words.”—Kevin Kline, actor and singer

“‘Well, did you evah!’ Cole Porter’s letters are full not just of delightful gossip but of the detail of working on Broadway and in Hollywood during the golden age of the American musical. ‘What a swell party it is!’—or at least was for Porter moving through high society across several continents. His words read as gloriously as his music sounds.”—Tim Carter, author of “Oklahoma!” The Making of an American Musical

“The considerable legacy of Cole Porter remains a powerful force in American music and this new collection of his letters is revelatory. It’s the closest we’ll ever get to an autobiography and is fascinating how a group of letters, sometimes written casually, collectively unmask previously hidden details about the man.”—Michael Feinstein, singer and Ambassador of The Great American Songbook

“Essential to understanding the private man behind the public myths Porter himself so persistently perpetuated.”—Kim H. Kowalke, editor of Speak Low: The Letters of Kurt Weill and Lotte Lenya