The Rediscovery of America: Native Peoples and the Unmaking of U.S. History (Hardcover) 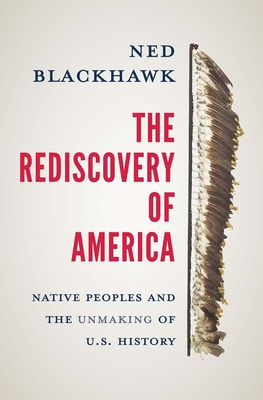 A sweeping and overdue retelling of U.S. history that recognizes that Native Americans are essential to understanding the evolution of modern America

The most enduring feature of U.S. history is the presence of Native Americans, yet most histories focus on Europeans and their descendants. This long practice of ignoring Indigenous history is changing, however, with a new generation of scholars insists that any full American history address the struggle, survival, and resurgence of American Indian nations. Indigenous history is essential to understanding the evolution of modern America.

Ned Blackhawk interweaves five centuries of Native and non‑Native histories, from Spanish colonial exploration to the rise of Native American self-determination in the late twentieth century. In this transformative synthesis he shows that

• European colonization in the 1600s was never a predetermined success;

• the first shots of the American Revolution were prompted by Indian affairs in the interior;

• California Indians targeted by federally funded militias were among the first casualties of the Civil War;

• the Union victory forever recalibrated Native communities across the West;

Blackhawk’s retelling of U.S. history acknowledges the enduring power, agency, and survival of Indigenous peoples, yielding a truer account of the United States and revealing anew the varied meanings of America.

Ned Blackhawk (Western Shoshone) is the Howard R. Lamar Professor of History and American Studies at Yale University, where he is the faculty coordinator for the Yale Group for the Study of Native America. He is the author of Violence over the Land: Indians and Empires in the Early American West. He lives in New Haven, CT.

“On his search to rediscover America, Blackhawk brilliantly rewrites U.S. history, illustrating that it cannot be told absent American Indians. This is the history text we have been waiting for.”—Roxanne Dunbar-Ortiz, author of An Indigenous Peoples’ History of the United States

“Richly told and deeply informed, The Rediscovery of America demonstrates the centrality of Indigenous Americans to U.S. history. Blackhawk shows that at every turn the enduring relations between natives and newcomers have shaped the course of the American republic.”—Claudio Saunt, author of Unworthy Republic

“Ranging across the continent and across the centuries, Ned Blackhawk skillfully interweaves American history and Native American history, demonstrating conclusively that we cannot properly understand one without the other.”—Colin  G. Calloway, Dartmouth College

“The Rediscovery of America is a testimony to the transformation of the field of American Indian history over the past several decades, and Blackhawk has abandoned the ‘interpretive tools’ of generations of American historians.”—Brenda J. Child, University of Minnesota