The Number Ones: Twenty Chart-Topping Hits That Reveal the History of Pop Music (Hardcover) 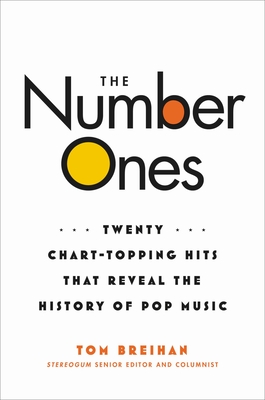 A Pitchfork Best Music Book of 2022

Beloved music critic Tom Breihan's fascinating narrative of the history of popular music through the lens of game-changing #1 singles from the Billboard Hot 100.

When Tom Breihan launched his Stereogum column in early 2018, “The Number Ones”—a space in which he has been writing about every #1 hit in the history of the Billboard Hot 100, in chronological order—he figured he’d post capsule-size reviews for each song. But there was so much more to uncover. The column has taken on a life of its own, sparking online debate and occasional death threats.

The Billboard Hot 100 began in 1958, and after four years of posting the column, Breihan is still in the early aughts. But readers no longer have to wait for his brilliant synthesis of what the history of #1s has meant to music and our culture. In The Number Ones, Breihan writes about twenty pivotal #1s throughout chart history, revealing a remarkably fluid and connected story of music that is as entertaining as it is enlightening.

The Numbers Ones features the greatest pop artists of all time, from the Brill Building songwriters to the Beatles and the Beach Boys; from Motown to Michael Jackson, Prince, and Mariah Carey; and from the digital revolution to the K-pop system. Breihan also ponders great artists who have never hit the top spot, like Bob Dylan, Bruce Springsteen, and James Brown. Breihan illuminates what makes indelible ear candy across the decades—including dance crazes, recording innovations, television phenomena, disco, AOR, MTV, rap, compact discs, mp3s, social media, memes, and much more—leaving readers to wonder what could possibly happen next.

Tom Breihan is the senior editor at the music website Stereogum, where he writes "The Number Ones," a column where he reviews every #1 hit in the history of the Billboard Hot 100. He's written for Pitchfork, the Village Voice, the AV Club, GQ, and the Ringer, among others. He lives in Charlottesville, Virginia, with his wife and kids. He is seven feet tall.

“Tom Breihan’s The Number Ones is a glorious rabbit hole dive into the biggest hits in popular music, analyzing the very physics of how they became hits and taking a forensic look at what made them ‘pop.’ It’s massively enjoyable when you love the song in question, and perhaps even more so when you don’t. One of the most enjoyable books on pop to ever roar up the charts."—Edgar Wright

"Tom Breihan is an absolutely crucial chronicler of the hit parade, a madman scholar digging deep in the vaults. The Number Ones is a revelatory celebration of pop history in all its glorious weirdness, the way only Breihan could tell the tale. These are classic tunes that everybody knows, but Breihan brilliantly blows away the dust, and makes them sound fresh and new. A hell of a storyteller, and a hell of a T-Pain fan."—Rob Sheffield

“A rich critical history of pop at its most universally revelatory.”—Rolling Stone

“Briskly written, a pleasure to read, The Number Ones is a musical treat.”—The Wall Street Journal

“For longtime readers of Breihan’s work, the tone will be instantly familiar: affable, conversational, and always funny, with surprising insights and ear-catching phrasings gliding in from every direction….The jokes, asides, and loping digressions all mimic the texture of conversation, pointing to Breihan’s enduring strength as a critic: when you read him, it feels like he’s talking to you.”—Pitchfork

One of Variety’s Best Music Books of 2022

“The book [is a] fascinating look at the last six-plus decades of popular music through the prism of Billboard‘s signature songs chart, digging into the nooks and crannies of both the music and the chart itself as the subject requires.”—Billboard

“The Number Ones is a tour de force of Breihan at his most nerdy, intricate, and enjoyable….No one parses the stories or puts the popular songs that have defined generations into perspective better than Breihan, who has delivered on the promise of his crazy column idea.”—The Aquarian

“An ideal way into the larger story of pop, and all its relations.”

“The Number Ones remains a breezy read, packed with interesting facts and historical context….[Breihan] also found creative ways to weave into the narratives stories about acts that never made it to No. 1, including Bob Dylan, Bruce Springsteen and the Backstreet Boys.”—The Atlanta Journal-Constitution

“Trying to capture the last seven decades of popular music through 20 songs sounds daunting, but this breezy history is gripping and entertaining…he attacks his subject with an engaging mix of clever facts and savvy observations…. For those looking for more conventional commentary, Breihan offers plenty of interesting insights into hits from the Beatles, Fleetwood Mac, Prince, and Mariah Carey, but the surprises are where he shines brightest. A fun, buzzy history that effectively uses context and criticism to explain the effervescence of pop music.”—Kirkus Reviews (starred)

A LitHub Pick to Bring on Weekend Travels