Stories I Might Regret Telling You: A Memoir (Hardcover) 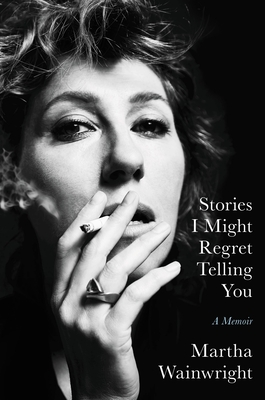 A singer-songwriter's heartfelt memoir about growing up in a bohemian musical family and her experiences with love, loss, motherhood, divorce, the music industry, and more.

Born into music royalty, the daughter of folk legends Kate McGarrigle and Loudon Wainwright III and sister to the highly-acclaimed and genre-defying singer Rufus Wainwright, Martha grew up in a world filled with such incomparable folk legends as Leonard Cohen; Suzy Roche, Anna McGarrigle, Richard and Linda Thompson, Pete Townsend, Donald Fagan and Emmylou Harris. It was within this loud, boisterous, carny, musical milieu that Martha came of age, struggling to find her voice until she exploded on the scene with her 2005 debut critically acclaimed album, Martha Wainwright, containing the blistering hit, "Bloody Mother F*cking Asshole," which the Sunday Times called one of the best songs of that year. Her successful debut album and the ones that followed such as Come Home to Mama, I Know You're Married but I've Got Feelings Too, and Goodnight City came to define Martha's searing songwriting style and established her as a powerful voice to be reckoned with.

In Martha's memoir, Stories I Might Regret Telling You, Martha digs into the deep recesses of herself with the same emotional honesty that has come to define her music. She describes her tumultuous public-facing journey from awkward, earnest, and ultimately rebellious daughter, through her intense competition and ultimate alliance with her brother, Rufus, to the indescribable loss of their mother, Kate, and then, finally, discovering her voice as an artist. With candor and grace, Martha writes of becoming a mother herself and making peace with her past struggles with Kate and her former self, finally understanding and facing the challenge of being a female artist and a mother. Ultimately, Stories I Might Regret Telling You will offer readers a thoughtful and deeply personal look into the extraordinary life of one of the most talented singer-songwriters in music today.

Martha Wainwright is an internationally renowned singer-songwriter, with over two decades of industry experience. Critically-acclaimed for the rawness and emotional honesty of both her vocals and lyrics, her albums include: Martha Wainwright (2005); I Know You're Married But I've Got Feelings Too (2008); Come Home to Mama (2012); the JUNO-nominated Songs in the Dark (2015), a collaboration with her half-sister Lucy Wainwright Roche; Goodnight City (2016); and her latest album, Love Will Be Reborn (2021). She is also an actress and was featured in Martin Scorsese's Aviator and the recent HBO special, Olive Kitteridge.

“With disarming candor and courage, Martha tells us of finding her own voice (one, in my opinion, without peer) and peace as a working artist and mother. Her story is made more unique because of the remarkably gifted musical family she was born into.”—Emmylou Harris

“What a wonderful gift this book is! Martha Wainwright has opened the doors and let us into the fabled, glamorous family that is the McGarrigle-Wainwrights. The ups and downs of a family that lives on the stage is shown in all its backstage squalor, and it is even more magical and cruel than one can possibly imagine. Martha shows us what it is like to be the black sheep of the family, the glorious earnest underachiever, who has always been the most lovable of the bunch. Her warm, rich writing displays the same oversharing sweetness that her songwriting possesses. And is, at the same time, filled with the humor, panache, and gutsy feminism of her live performances. Martha Wainwright was born in a circus and shows us the great, absurd expectations that come with that birthright. But even more, this book offers a portrait of a modern, blended family that will make you understand and forgive yours. Wainwright shows how a big, dysfunctional brood can be a blessing and filled with surprising gifts and makes the heart grow bigger. A surprising and brilliantly relatable book.”
—Heather O’Neill, bestselling author of The Lonely Hearts Hotel

"A beautiful and clear-eyed memoir, full of music, friendship, love and heartache. Somehow at once sizzling and wise, as undeniable as the singer who wrote it.”
—Sean Michaels, Scotiabank Giller Prize-winning novelist and founder of Said the Gramophone

“I have been listening to Martha Wainwright for at least twenty years, admiring her from afar. Her new memoir, Stories I Might Regret Telling You, made me feel like I was sitting in a corner of one of her New York apartments, reading her private diaries under a blanket with a flashlight. Martha writes like a soldier in the trenches sending word home, not knowing whether she will live or die, bringing uncomfortable, sometimes unbearable, honesty to bear. I was sucked in from the first page, though occasionally I winced because it was all so relatable. A casual sadness strings itself through her story of becoming herself, taking no prisoners, casting regret aside like a cigarette. I kept rereading certain sentences thinking they would make such wonderful songs. This entire memoir is a song.
I turned the last page and felt like I had made a new friend, the kind you wish you were cool enough to have but never had the courage to pursue. My only disappointment? Her memoir wasn’t long enough. I can’t wait for volume two.”
—Jann Arden, singer, songwriter, TV star, bestselling author