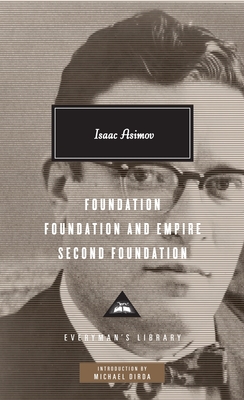 It is the saga of the Galactic Empire, crumbling after twelve thousand years of rule. And it is the particular story of psychohistorian Hari Seldon, the only man who can see the horrors the future has in store—a dark age of ignorance, barbarism, and violence that will last for thirty thousand years. Gathering a band of courageous men and women, Seldon leads them to a hidden location at the edge of the galaxy, where he hopes they can preserve human knowledge and wisdom through the age of darkness.

In 1966, the Foundation trilogy received a Hugo Award for Best All-Time Series, and it remains the only fiction series to have been so honored. More than fifty years after their original publication, the three Foundation novels stand as classics of thrilling, provocative, and inspired world-building.

Isaac Asimov (1920–1992), one of the “Big Three” science fiction masters of his time (along with Robert Heinlein and Arthur C. Clarke), is best known for his Robot, Galactic Empire, and Foundation series.

Michael Dirda is a Pulitzer Prize–winning critic for The Washington Post and the author of the memoir An Open Book and of four collections of essays: Readings, Bound to Please, Book by Book, and Classics for Pleasure.