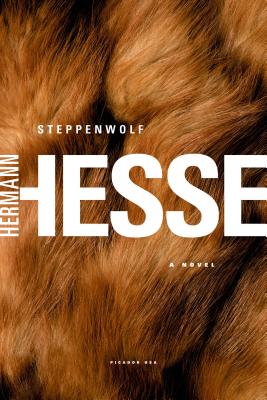 "Much like The Magic Theatre featured in its psychedelic climax, this book is “not for everybody.” But if you struggle between despair + immortality - pick this up. “Eternity is a mere moment, just long enough for a joke.

With its blend of Eastern mysticism and Western culture, Hesse's best-known and most autobiographical work is one of literature's most poetic evocations of the soul's journey to liberation

Harry Haller is a sad and lonely figure, a reclusive intellectual for whom life holds no joy. He struggles to reconcile the wild primeval wolf and the rational man within himself without surrendering to the bourgeois values he despises. His life changes dramatically when he meets a woman who is his opposite, the carefree and elusive Hermine. The tale of the Steppenwolf culminates in the surreal Magic Theater—For Madmen Only!

Originally published in English in 1929, Steppenwolf 's wisdom continues to speak to our souls and marks it as a classic of modern literature.

Hermann Hesse (1877-1962) was a German poet and novelist. He received the Nobel Prize in Literature in 1962. He was the author of numerous works including Siddhartha, Steppenwolf, and Demian.

"Hesse is a writer of suggestion, of nuance, of spiritual intimation."—The Christian Science Monitor

"For all its savagely articulate descriptions of torment and isolation, it is most eloquent about something less glamorous but far more important: healing."—The Guardian