Education of a Felon: A Memoir (Paperback) 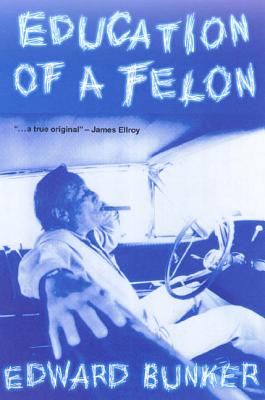 In Education of a Felon, the reigning champion of prison novelists finally tells his own story. The son of an alcoholic stagehand father and a Busby Berkeley chorus girl, Bunker was--at seventeen--the youngest inmate ever in San Quentin. His hard-won experiences on L.A.'s meanest streets and in and out of prison gave him the material to write some of the grittiest and most affecting novels of our time.
From smoking a joint in the gas chamber to leaving fingerprints on a knife connected to a serial kiler, from Hollywood's steamy undersde to swimming in the Neptune pool at San Simeon, Bunker delivers a memoir as colorful as any of his novels and as compelling as the life he's lead.

Edward Bunker lives in Los Angeles with his wife. He is the author of the books No Beast So Fierce, Animal Factory, and Little Boy Blue. He is also the coauthor of the movie Runaway Train. He played Mr. Blue in the film Reservoir Dogs.

“In this picaresque, harrowing, humorous yet deeply sad excursion through his dark-starred youth, Bunker--arguably the most renowned convict writer in America--serves as both participant and witness to the mid-century carnival of L.A. crime immortablized by James Ellroy...a thought-provoking and richly re-created tale of a career criminal.” —Publishers Weekly

“Education of a Felon is a masterful summation of the hard and brutal life of crime and prison from which Edward Bunker chiseled the virogour prose that marks him as America's foremost chronicler of prison life...” —The Los Angeles Times