This Bird Has Flown: A Novel (Hardcover) 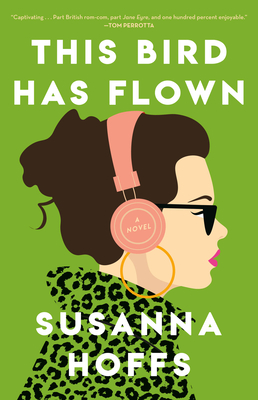 A delightfully funny and steamy novel about music, fate, redemption, and love, from a beloved songwriter and the co-founder of The Bangles that is "part British romcom, part Jane Eyre, and one hundred percent enjoyable" (Tom Perrotta).

Jane Start is thirty-three, broke, and recently single. Ten years prior, she had a hit song—written by world-famous superstar Jonesy—but Jane hasn’t had a breakout since. Now she's living out of four garbage bags at her parents’ house, reduced to performing to Karaoke tracks in Las Vegas. Rock bottom.

But when her longtime manager Pippa sends Jane to London to regroup, she’s seated next to an intriguing stranger on the flight—the other Tom Hardy, an elegantly handsome Oxford professor of literature. Jane is instantly smitten by Tom, and soon, truly inspired. But it’s not Jane’s past alone that haunts her second chance at stardom, and at love. Is Tom all that he seems? And can Jane emerge from the shadow of Jonesy's earlier hit, and into the light of her own?

In turns deeply sexy, riotously funny, and utterly joyful, This Bird Has Flown explores love, passion, and the ghosts of our past, and offers a glimpse inside the music business that could only come from beloved songwriter Susanna Hoffs.

"In this sexy, page-turning treat, Susanna Hoffs writes as engagingly as she sings.” —Helen Fielding, author of the bestselling sensation Bridget Jones’s Diary

“A little bit romance, a little bit rock-and-roll—this isn’t just a book, it’s a love song, and it should come as no surprise that Susanna Hoffs has crafted the perfect one to put on your playlist.”―Christina Lauren, New York Times bestselling author of The Unhoneymooners

Boasting one of pop’s most beloved voices, Susanna Hoffs graduated from U.C. Berkeley with a degree in Art. In 1981 she co-founded The Bangles, with whom she recorded and released a string of chart-topping singles including “Manic Monday," “Walk Like an Egyptian,” “Hazy Shade of Winter,” and “Eternal Flame” (which she cowrote), before embarking on a critically acclaimed solo career. She also wrote, recorded music for, and appeared in the Austin Powers movies, and played herself on Season 1 of “The Gilmore Girls.” This Bird Has Flown is her first novel. She lives in Los Angeles with her husband, filmmaker Jay Roach.

"In this sexy, page-turning treat of a debut novel, Susanna Hoffs writes as engagingly as she sings."
—Helen Fielding, author of the bestselling phenomenon Bridget Jones's Diary

“This book is a blast. It satisfied the part of me that loves a hot rock-and-roll romance, with Vegas adventures and sold out concerts and lots of champagne, as well as the part of me that loves a tender love story with an Oxford professor, with slow airplane kisses, drives in the British countryside and long talks over tea. It’s about art and new beginnings and love and friendship and regrets and fear and taking risks, and it’s such a fun read.”—Jasmine Guillory, New York Times bestselling author of Drunk on Love

“A little bit romance, a little bit rock-and-roll—this isn’t just a book, it’s a love song, and it should come as no surprise that Susanna Hoffs has crafted the perfect one to put on your playlist.”—Christina Lauren, New York Times bestselling author of The Unhoneymooners

“Elegant, thoughtful, and ever-so-sexy, This Bird Has Flown will stay in your mind—in your heart—like a favorite song.”—Rachel Hawkins, New York Times bestselling author of The Wife Upstairs

“A tender, funny, love story wrapped in a guitar-jamming rock-and-roll cloak. I haven’t had this much fun reading a book in a long, long time."—Jessica Anya Blau, author of Mary Jane

“What a treat, and a pleasure, to find out that Susanna Hoffs can tell a story filled with characters as engaging as her song lyrics, who come alive to crack you up and break your heart, and tell it with all the confidence you would expect from a seasoned explorer of the depths of love, music, and life.”—Ayelet Waldman, New York Times bestselling author of A Really Good Day