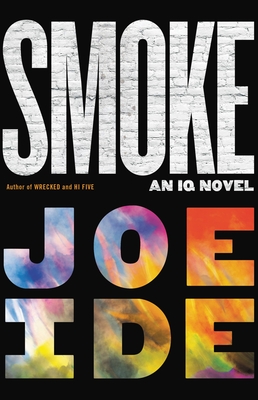 This is book number 5 in the An IQ Novel series.

Isaiah Quintabe—an unlicensed detective for all seasons—and his best friend and masterful sidekick, Juanell Dodson, are at a crossroads in this latest installment of the "aggressively entertaining" IQ series (New York Times). This time, their lives may never be the same.

Isaiah Quintabe is no longer IQ, the genius of East Long Beach; instead, he’s a man on the road and on the run, hiding in a small Northern California town when his room is broken into by a desperate young man on the trail of the state’s most prolific serial killer.

His old partner, Juanell Dodson, must go straight or lose his wife and child. His devil’s bargain? An internship at an LA advertising agency, where it turns out the rules of the street have simply been dressed in business casual, but where the aging company’s fortunes may well rest on their ability to attract a younger demographic. Dodson—”the hustler’s hustler”—just may be the right man for the job.

Ide is the crime writer’s crime writer, and he’s filled his best novel yet with desperate souls, courageous outcasts, an ex-stripper who’ll do anything to protect her son, and wild half-brothers who may be the very incarnation of evil.

With deft plotting, lacerating humor, and a keen eye for the ways in which characters rise or fall based on their ties to one another, Smoke is Joe Ide’s crowning achievement.

Joe Ide is of Japanese American descent. Growing up in South Central Los Angeles, Joe's favorite books were the Conan Doyle Sherlock Holmes stories. The idea that a person could face the world and vanquish his enemies with just his intelligence fascinated him. Joe went on to earn a graduate degree and had several careers before writing his debut novel, IQ, inspired by his early experiences and his love of Sherlock Holmes. Joe lives in Santa Monica, California.

"If you’ve read any of his other novels starring the rogue East Long Beach private investigator Isaiah Quintabe, known as “IQ,” you know that Ide doesn’t write conventional suspense stories....In its own idiosyncratic fashion, Smoke is superb."—Maureen Corrigan, Washington Post

“A journeyman writer and a superb storyteller.”—Jeff Mannix, The Durango Telegraph

"Ide has displayed a rare ability to mix dark comedy and gut-churning drama…mixmaster Ide's compulsion to blend light and dark (Isaiah's confrontation with the serial killers, while gruesome, takes the form of "a slapstick movie shot in a burning insane asylum") affects the two plots in surprising ways, again producing an emotion-rich form of character-driven tragicomedy, but one in which peril forever loiters in the shallows.”
—Booklist

“Fiery-hot…shows no signs of sequel fatigue, and Smoke can be read as a standalone, but new readers will become even bigger fans by diving into the previous books. The author has an innate ability to find the humor and humanity in both the evil and the innocent characters, and shows that rediscovering one's mojo can come only after confronting obstacles.”
—Shelf Awareness

“Complex in plotting and shrewdly observant of IQ's East L.A....Regulars will relish every turn; newcomers should probably look at an earlier one first—you'll be glad you did, whether you come back for all the rest or not; if you do come back to this one, you'll be glad of that, too.”
—George Ernsberger, The Sullivan County Democrat

“Unique… [a] fast-moving train and…character-driven adventure filled with wit, heart, and emotion…Ide proves to be an expert storyteller as he weaves effortlessly the multiple multi layered colorful characters into a complex and unexpected denouement.”—Lou Jacobs, Mystery & Suspense

“The plot lines are becoming even more ferocious. And IQ keeps getting… smarter? Yep. And the ending? YIKES. Book six Mr. Ide? Bring. It. ON!”—Berkley McDaniel, The Southern Bookseller Review

"People who pick up Smoke are in for a treat."

"Smoke is an engrossing mystery with multiple story arcs that are quite interesting....With plenty of nail-biting tension, Joe Idebrings this thrilling mystery to an action-packed conclusion."

PRAISE FOR JOE IDE AND THE IQ NOVELS: "A brand-new comedic franchise with a bright future... Aggressively entertaining plotting is paired with the kind of dialogue for which readers love Don Winslow. This series is a Los Angeles classic right from the start."
--- Janet Maslin, New York Times

"Joe’s brilliant imagining of what Sherlock Holmes would be like if he came out of East Long Beach."

"One of the most original thrillers of the year... [A] sometimes scary, often whimsical, off-the-wall delight... It's a mad world that late-blooming Joe Ide has brought forth from his past, a spicy mix of urban horror, youthful striving and show-business absurdity. His IQ is an original and welcome creation."—Washington Post

"Joe Ide introduces one of the coolest investigators working the mean streets of Los Angeles... Ide emulates Walter Mosley, that great chronicler of South Central Los Angeles via the Easy Rawlins novels. That's some serious company with whom to be traveling."—Chicago Tribune

"I don't know how fast Joe Ide writes, but from now on he'll have to write faster. Everyone who reads IQ will be clamoring for the next book, and for the one after that. This is one of the most intriguing--and appealing--detective characters to come along in years."—Carl Hiassen

"A consulting detective for a time and a place that needs one."—NPR