Home Baked: My Mom, Marijuana, and the Stoning of San Francisco (Hardcover) 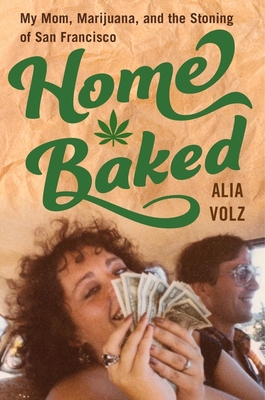 FINALIST FOR THE NATIONAL BOOK CRITICS CIRCLE AWARD FOR AUTOBIOGRAPHY

A blazingly funny, heartfelt memoir from the daughter of the larger-than-life woman who ran Sticky Fingers Brownies, an underground bakery that distributed thousands of marijuana brownies per month and helped provide medical marijuana to AIDS patients in San Francisco—for fans of Armistead Maupin and Patricia Lockwood

During the '70s in San Francisco, Alia's mother ran the underground Sticky Fingers Brownies, delivering upwards of 10,000 illegal marijuana edibles per month throughout the circus-like atmosphere of a city in the throes of major change. She exchanged psychic readings with Alia's future father, and thereafter had a partner in business and life.

Decades before cannabusiness went mainstream, when marijuana was as illicit as heroin, they ingeniously hid themselves in plain sight, parading through town—and through the scenes and upheavals of the day, from Gay Liberation to the tragedy of the Peoples Temple—in bright and elaborate outfits, the goods wrapped in hand-designed packaging and tucked into Alia's stroller. But the stars were not aligned forever and, after leaving the city and a shoulda-seen-it-coming divorce, Alia and her mom returned to San Francisco in the mid-80s, this time using Sticky Fingers' distribution channels to provide medical marijuana to friends and former customers now suffering the depredations of AIDS.

ALIA VOLZ is the author of Home Baked: My Mom, Marijuana, and the Stoning of San Francisco, winner of the 2020 Golden Poppy Award for nonfiction from the California Independent Booksellers Alliance. Her work has appeared in The Best American Essays, The New York Times, Bon Appetit, Guernica, The Best Women’s Travel Writing, and many other publications. She's received fellowships from MacDowell and Ucross. Her family story has been featured on Snap Judgment, Criminal and NPR’s Fresh Air. She lives in San Francisco, CA.

Winner of the California Bookseller Association's Golden Poppy Award for Nonfiction  Finalist for the National Book Critics Circle Award for Autobiography  A San Francisco Chronicle Bestseller One of Entertainment Weekly's "Books to Read in April"  One of Lambda Literary's "Most Anticipated LGBTQ Books of April 2020"  One of Reader's Digest's “Best Reads From the 2020 Quarantine Book Club”  One of She Reads' "Most Anticipated Memoirs of 2020"  One of Alma's "Favorite Books for Spring 2020"  Included on 7x7's "Spring Reading List: Books by Bay Area Authors"   “The subtitle, ‘My Mom, Marijuana, and the Stoning of San Francisco’ tells you much of what you need to know in terms of content. But as a portrait of a heroics, innovation, grit, and pot-baking in an epidemic (in this case, the AIDS crisis), it's also strikingly relevant. And beautifully written, too.” —Entertainment Weekly, “Books to Read in April” "A beautiful evocation of the Bay Area in the years before tech bros and big money changed the city...Like Stefan Zweig’s The World of Yesterday, this is a narrative about a time that is now gone: San Francisco as circus, where pot was both ubiquitous and as illegal as heroin. Under Volz’s careful attention, all of it—the era, the place, and her own parents—is rendered clear, bright, and beautiful." —Paris Review, Staff Pick   "An earnest yet comic memoir by the daughter of the owner of the Sticky Fingers bakery, purveyor of pot brownies and crusader for legalization." —New York Times, "New and Noteworthy Audiobooks"    "A raunchy and rollicking account of a vanished era told by someone who paid very close attention to her larger-than-life parents. I gobbled it up like an edible." —Armistead Maupin   "I devoured this book! Sex, drugs, rock-n-roll, a savvy business woman, a social and medicinal revolution: What’s not to love? This is a story Alia Volz was born to tell." —Rebecca Skloot, bestselling author of The Immortal Life of Henrietta Lacks   "[A] nostalgic, thoroughly entertaining new romp of a memoir...[An] intensely personal portrait of an unconventional childhood, as well as a rigorously reported account of a kaleidoscopic time in San Francisco history, an era of exuberant highs and pitch-black lows." —San Francisco Chronicle    "While a memoir, Home Baked is also an intensively researched book on San Francisco and the burgeoning cannabis culture surrounding Sticky Fingers Brownies, based on archival research and hundreds of hours of interviews with LGBT activists, cannabis advocates and, of course, Volz's parents. Home Baked also provides a timely contrast with both modern San Francisco and the blossoming cannabis industry, which can now offer safe and legal access to the drug, although significant reforms to the war on drugs have not materialized." —Newsweek   "Ample, skillfully researched, and cleanly narrated, Volz's debut is really five books in one . . . Alia in tow, Mer and her peers travel among San Francisco, Humboldt County and Marin, connecting an essentially agricultural project to an urban counterculture; they also weave together less and more responsible ways to raise a kid, almost as Volz herself weaves together her archives of the post-hippie-era Bay Area with her own vivid memories." &mda —