In: A Graphic Novel (Hardcover) 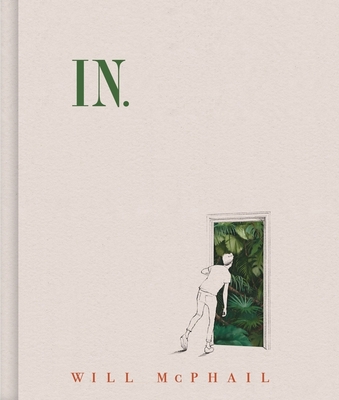 A poignant and witty graphic novel by a leading New Yorker cartoonist, following a millennial's journey from performing his life to truly connecting with people

Nick, a young illustrator, can’t shake the feeling that there is some hidden realm of human interaction beyond his reach. He haunts lookalike fussy, silly, coffee shops, listens to old Joni Mitchell albums too loudly, and stares at his navel in the hope that he will find it in there. But it isn’t until he learns to speak from the heart that he begins to find authentic human connections and is let in—to the worlds of the people he meets. Nick’s journey occurs alongside the beginnings of a relationship with Wren, a wry, spirited oncologist at a nearby hospital, whose work and life becomes painfully tangled with Nick’s.

Illustrated in both color and black-and-white in McPhail’s instantly recognizable style, In elevates the graphic novel genre; it captures his trademark humor and compassion with a semi-autobiographical tale that is equal parts hilarious and heart-wrenching—uncannily appropriate for our isolated times.

Will McPhail has been contributing cartoons, sketchbooks, and humor pieces to The New Yorker since 2014. He is a two-time winner of the Reuben Award for cartooning, and his debut, In, was the first graphic novel to win the Betty Trask Prize. He lives in Edinburgh, Scotland.

“Will McPhail draws sensitively and with impeccable emotional precision. In IN, he has created a hilarious, touching, infinitely surprising world. I will read this book many times”—Liana Finck, author of Passing for Human: A Graphic Memoir   “Mr. McPhail’s witty and moving work shows the high stakes of small, everyday connections by affording a glimpse of a time when it’s too late to make them.”—The Wall Street Journal   "A graceful and painfully human narrative...Sharp and often quite moving."—The AV Club   "A sharply observed, funny, and achingly poignant examination of a subject widely understood yet rarely described, rendered subtle and playful, and made wonderfully new."—The Paris Review   "[A] breakout graphic novel...The characters in In are absolutely delightful."—BookPage, STARRED review   "McPhail's delicately lined graphite drawings, neatly squared into comics-y frames, are playful yet full of depth. ...Impressive art, a relatable hero's struggle, and a healthy dose of humor (Nick haunts establishments with names like 'Your Friends Have Kids Bar' and 'Gentrificchiato') will make McPhail's graphic novel debut appealing to many."—Booklist   "The visuals are scrumptious and the yearning for personal connection is deeply relatable...McPhail presents [beats] with style and grace, deftly moving the story along with subtle, impactful visual cues...Gorgeous."—Kirkus Reviews —