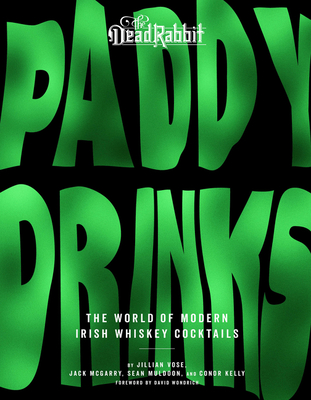 The folks behind the world-renowned, award-winning Irish pub, Dead Rabbit, know a thing or two about whiskey, and about making great whiskey cocktails. To start, you need to understand the flavors of whiskey, which means going to the very beginning—at the distillery. With an illustrated guide of the stages of production and the differences between the various styles of whiskey, plus flavor wheels and tasting notes, you’ll be well equipped to create your own drinks utilizing various Irish whiskey brands and styles before getting into the Dead Rabbit’s ever-creative, innovative cocktail recipes. With a foreword by the authority on cocktails, David Wondrich, Paddy Drinks is as serious about its whiskey as it is a celebration.

JILLIAN VOSE is the beverage director at The Dead Rabbit in Lower Manhattan. She was named one of the 10 Best American Bartenders 2017 in the Spirited Awards at Tales of The Cocktail.

In his role as bar manager at both the Dead Rabbit and the Merchant Hotel, JACK McGARRY became internationally known for his extensive historically-based beverage programs. For each project, Jack thoroughly tested thousands of recipes from scores of cocktail books from the mid-nineteenth century, which sometimes involved making 50 to 70 versions of a single drink before one was deemed the best. In July 2013, Jack was honored with the prestigious Tales of the Cocktail "International Bartender of the Year" award, making him the youngest-ever recipient and only the second in America.