Infidel Kings and Unholy Warriors: Faith, Power, and Violence in the Age of Crusade and Jihad (Paperback) 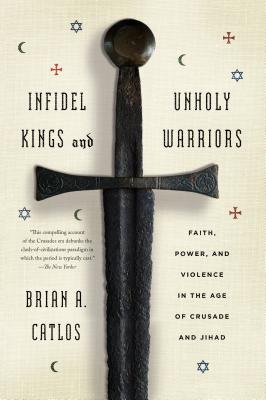 An in-depth portrait of the Crusades-era Mediterranean world, and a new understanding of the forces that shaped it

In Infidel Kings and Unholy Warriors, the award-winning scholar Brian Catlos puts us on the ground in the Mediterranean world of 1050–1200. We experience the sights and sounds of the region just as enlightened Islamic empires and primitive Christendom began to contest it. We learn about the siege tactics, theological disputes, and poetry of this enthralling time. And we see that people of different faiths coexisted far more frequently than we are commonly told.
Catlos's meticulous reconstruction of the era allows him to stunningly overturn our most basic assumption about it: that it was defined by religious extremism. He brings to light many figures who were accepted as rulers by their ostensible foes. Samuel B. Naghrilla, a self-proclaimed Jewish messiah, became the force behind Muslim Granada. Bahram Pahlavuni, an Armenian Christian, wielded power in an Islamic caliphate. And Philip of Mahdia, a Muslim eunuch, rose to admiral in the service of Roger II, the Christian "King of Africa."
What their lives reveal is that, then as now, politics were driven by a mix of self-interest, personality, and ideology. Catlos draws a similar lesson from his stirring chapters on the early Crusades, arguing that the notions of crusade and jihad were not causes of war but justifications. He imparts a crucial insight: the violence of the past cannot be blamed primarily on religion.

Brian A. Catlos, a professor of religious studies at the University of Colorado at Boulder and a research associate at the University of California, Santa Cruz, has received many prestigious fellowships and awards. He is the author of the prizewinning The Victors and the Vanquished: Christians and Muslims of Catalonia and Aragon (1050–1300), The Muslims of Medieval Latin Christendom ca. 1050–1615, and is featured in the documentary Cities of Light. He has traveled extensively in Europe, the Middle East, and the Americas, and has contributed to many travel guidebooks, including his Rough Guide to Languedoc & Roussillon. He and his family divide their time between Boulder and Barcelona.

“This compelling account of the Crusades era debunks the clash-of-civilizations paradigm in which the period is typically cast. Through vivid portraits of Christian, Jewish, and Muslim figures, Catlos depicts an era of interfaith coöperation and fluid identities.” —The New Yorker

“Infidel Kings and Unholy Warriors brings nuance and complexity to the age of the Crusades.” —Christian Science Monitor

“[Brian A. Catlos] succeeds in making his history of three religions and as many continents and centuries approachable, believable, and captivating.” —Publishers Weekly

“In this fast-paced narrative of coexistence and warfare in the medieval Mediterranean, Brian A. Catlos shows how the language of religious strife has concealed the political and economic struggles that heralded modernity.” —Thomas F. Glick, Professor of History, Boston University

“Through a series of illuminating vignettes, Brian A. Catlos provides new insights into the complex relations between Christians, Muslims, and Jews in the medieval Mediterranean. His lively narrative and command of the sources allow us to see the nature of both the antagonism and cooperation between the three groups. This is an excellent book and a wonderful portrait of an important aspect of Mediterranean society.” —Teofilo F. Ruiz, Professor of History, University of California, Los Angeles.

“Brian A. Catlos takes us on a tour of a medieval Mediterranean world in which Muslims, Christians, and Jews all worship the same twin gods of power and wealth. They lived together, fought together, and traded together, saving religion for those Machiavellian moments when it was useful for pursuing politics or destroying rivals. Catlos's age of Crusade and jihad is not one of faith but of power and violence, in which people of all religions are intertwined in a vast Game of Thrones. The result is a vivid historical narrative, as well as a provocative allegory for the present.” —David Nirenberg, Professor of Medieval History and Social Thought, University of Chicago

“Panoramic in its scope and precise in its observations, Infidel Kings and Unholy Warriors will fully engage those new to the history of the crusading age and, at the same time, instruct those who know—or thought they knew—quite a bit about the period.” —Philip Daileader, Associate Professor of History, William & Mary

“Absorbing and illuminating, Infidel Kings and Unholy Warriors deepens our appreciation of an era that seems so improbable now: those centuries when Muslims, Jews, and Christians were twined in one another's destinies.” —Tamim Ansary, author of West of Kabul, East of New York