The Secret Life of the American Musical: How Broadway Shows Are Built (Paperback) 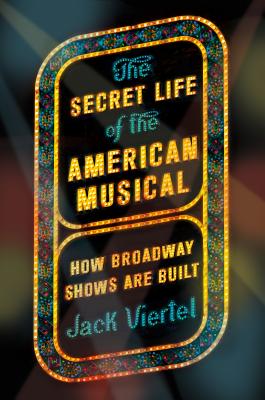 For almost a century, Americans have been losing their hearts and losing their minds in an insatiable love affair with the American musical. It often begins in childhood in a darkened theater, grows into something more serious for high school actors, and reaches its passionate zenith when it comes time for love, marriage, and children, who will start the cycle all over again. Americans love musicals. Americans invented musicals. Americans perfected musicals. But what, exactly, is a musical?

In The Secret Life of the American Musical, Jack Viertel takes them apart, puts them back together, sings their praises, marvels at their unflagging inventiveness, and occasionally despairs over their more embarrassing shortcomings. In the process, he invites us to fall in love all over again by showing us how musicals happen, what makes them work, how they captivate audiences, and how one landmark show leads to the next—by design or by accident, by emulation or by rebellion—from Oklahoma! to Hamilton and onward.

Structured like a musical, The Secret Life of the American Musical begins with an overture and concludes with a curtain call, with stops in between for “I Want” songs, “conditional” love songs, production numbers, star turns, and finales. The ultimate insider, Viertel has spent three decades on Broadway, working on dozens of shows old and new as a conceiver, producer, dramaturg, and general creative force; he has his own unique way of looking at the process and at the people who collaborate to make musicals a reality. He shows us patterns in the architecture of classic shows and charts the inevitable evolution that has taken place in musical theater as America itself has evolved socially and politically.

The Secret Life of the American Musical makes you feel as though you’ve been there in the rehearsal room, in the front row of the theater, and in the working offices of theater owners and producers as they pursue their own love affair with that rare and elusive beast—the Broadway hit.

Jack Viertel is the senior vice president of Jujamcyn Theaters, which owns and operates five Broadway theaters. He has been involved in dozens of productions presented by Jujamcyn since 1987, including multiple Pulitzer Prize and Tony Award winners, from City of Angels to Angels in America. He has also helped shepherd six of August Wilson’s plays to Broadway. He is the artistic director of New York City Center’s acclaimed Encores! series, which presents three musical productions every season. In that capacity he has overseen fifty shows, for some of which he adapted the scripts. He conceived the long-running Smokey Joe’s Cafe and the critically acclaimed After Midnight and has been a creative consultant on many shows, including Hairspray, A Christmas Story, and Dear Evan Hansen. He was the Mark Taper Forum’s dramaturg and the drama critic and arts editor of the Los Angeles Herald Examiner, and he has spent a decade teaching musical theater at the Tisch School of the Arts at New York University.

"Both revelatory and entertaining. Viertel combines a scholarly approach with a light touch that enables us to see anew familiar songs and musical theater moments we'd long taken for granted." —The New York Times Book Review

"A lively manual for writers and public alike on how the songs suit the story and how the story needs the songs." —The Wall Street Journal

"The best general-audience analysis of musical theater I have read in many years." —The Charlotte Observer

“Jack Viertel changed my theater-going life, and he might change yours . . . The Secret Life of the American Musical: How Broadway Shows Are Built is a delightful, accessible guide to why your favorite productions work. It’s a little bit history, a little bit memoir, a little bit criticism and, for any theater fan, a whole lot of fun.” —The Dallas Morning News

"Viertel is well-steeped in Broadway culture, lore and productions . . . An enlightening trip for lovers of musicals." —Kirkus Reviews

"A valuable addition to the theater lover’s bookshelf." —Publishers Weekly

"[An] engaging, insightful anatomy of a singularly American art form . . . There is much to savor." —MORE

"Viertel articulates his rules of commercial success so lucidly that even seasoned hands will come away with a clearer understanding of why some shows work while others flop." —Commentary

"Thoroughly interesting . . . There’s just something very pleasant about reading someone intelligently and affectionately look at what make a show tick, beat by choreographed beat." —The A.V. Club

"Viertel has written what will become a classic textbook on the architecture and construction of the American musical . . . What Harold Bloom did for Shakespearean exegesis and Peter Drucker for management, Viertel has done for theater: written a definitive work by raising the curtain and laying bare the work of playwrights, composers, librettists, choreographers, and directors." —Barry X. Miller, Library Journal (starred review)

“Viertel is well-steeped in Broadway culture, lore and productions . . . An enlightening trip for lovers of musicals.” —Kirkus Review

“Jack Viertel writes about the master craftsmen of the American musical, past and present, and reveals his own mastery on every page—his knowledge of the Broadway musical and of the intricate formula in the making of a show (or the breaking of it), and his passion for Broadway and the citizens who make the street come alive. I’ve been schooled.” —Patti LuPone

“In The Secret Life of the American Musical, Jack Viertel, a Broadway producer and dramaturgical swami, has broken down Broadway’s greatest musicals into their constituent storytelling parts (a sort of anatomy of joy) and delivered a showstopper: one of the best-written, most illuminating, and most infectiously entertaining books on the genre I know. Delight and insight vie with each other on every scintillating page. ‘It’s boffo!’ as they say on the Rialto.” —John Lahr, author of Tennessee Williams: Mad Pilgrimage of the Flesh

“This is unfair: no one who knows so much should be able to write so well. And no one in the world knows as much about the shape and substance of the classic American musical as Jack Viertel. His book is a treasure.” —Daniel Okrent, author of Last Call: The Rise and Fall of Prohibition

“Jack Viertel’s remarkable book has the uncanny effect of making us see something we thought we knew everything about in a way that makes us feel as though we are seeing it all for the first time. He invents a way of thinking about musicals that is utterly fresh and insightful, and while doing so he makes us remember exactly why we love them so much—by somehow re-creating the overwhelming, heart-stopping feeling we had when we were likely ten years old and fell in love with them the second our first overture began. By simultaneously (and brilliantly) embracing and deconstructing a beloved American art form, he brings us back to our most innocent selves, and all we can do is be grateful to him for reminding us of who we used to be.” —Scott Rudin