Sing Her Down: A Novel (Hardcover) 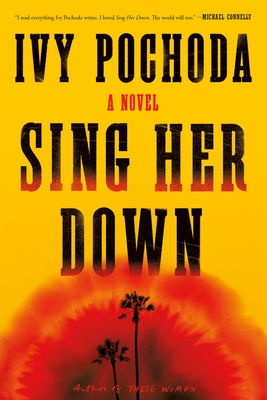 “I read everything Ivy Pochoda writes. Her capture of the complexities, diversities, and insanities of today’s life and culture is next to none. I loved Sing Her Down. The world will too.” —Michael Connelly, author of Desert Star

No Country for Old Men meets Killing Eve in this gritty, feminist Western thriller from the award-winning author of These Women.

Florence "Florida" Baum is not the hapless innocent she claims to be when she arrives at the Arizona women's prison—or so her ex-cellmate, Diosmary Sandoval, keeps insinuating.

Dios knows the truth about Florida's crimes, understands the truth that Florence hides even from herself: that she wasn't a victim of circumstance, an unlucky bystander misled by a bad man. Dios knows that darkness lives in women too, despite the world's refusal to see it. And she is determined to open Florida's eyes and unleash her true self.

When an unexpected reprieve gives both women their freedom, Dios's fixation on Florida turns into a dangerous obsession, and a deadly cat-and-mouse chase ensues from Arizona to the desolate streets of Los Angeles.

With blistering, incisive prose, the award-winning author Ivy Pochoda delivers a razor-sharp Western. Gripping and immersive, Sing Her Down is a spellbinding thriller setting two indelible women on a path to certain destruction and an epic, stunning showdown.

Ivy Pochoda is the author of the critically acclaimed novels Wonder Valley, Visitation
Street, and These Women. She won the 2018 Strand Critics Award for Best Novel and the
Prix Page America in France, and has been a finalist for the Los Angeles Times Book
Prize and the Edgar Award, among other awards. For many years, Ivy taught creative
writing at Studio 526 in Los Angeles's Skid Row. She is currently a professor of creative
writing at the University of California Riverside-Palm Desert low-residency MFA
program. She lives in Los Angeles.

"A thoroughly entertaining, mean-as-a-snake modern Western, Sing Her Down hits like a shotgun blast."
—Dennis Lehane, author of Small Mercies

“Sing Her Down is that rare novel that explodes your expectations from the very first page and goes on doing so until the end. Ivy Pochoda finds these characters at the root of their pain and desire. The prose is flayed and taut, the iconic episodes just keep stacking up, and the entirety has the epic intensity of a murder ballad.” —Jonathan Lethem, author of The Arrest

“I read everything Ivy Pochoda writes. Her capture of the complexities, diversities, and insanities of today’s life and culture is next to none. I loved Sing Her Down. The world will too.” —Michael Connelly, author of Desert Star

“Urgent, haunting, and fearless, Ivy Pochoda’s Sing Her Down has the grit and guile of Rachel Kushner, but with a ferocious empathy all Pochoda’s own. Pochoda proves herself a singular portraitist of Los Angeles, and Sing Her Down is her most ambitious and accomplished novel yet.” —Megan Abbott, author of The Turnout

“Ivy Pochoda once again writes with empathy about a world of unseen, unheard women—this time, two former cellmates whose lives remain entangled after their sudden release from prison. Sing Her Down is a stunning thriller, at once beautiful and gritty. Pochoda is a major talent.” —Alafair Burke, The New York Times bestselling author of Find Me

“Sing Her Down is an incantation, a hallucination, a fiery odyssey of women taking back the power stolen and leached from body and mind, while their souls got harder and harder—like diamonds. Ivy Pochoda's women inhabit a world everyone should walk into with them, a universe everyone should know.” —Susan Straight, author of Mecca