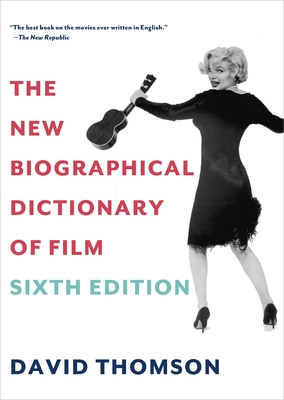 With more than 100 new entries, from Amy Adams, Benedict Cumberbatch, and Cary Joji Fukunaga to Joaquin Phoenix, Mia Wasikowska, and Robin Wright, and completely updated,  here from David Thomson—“The greatest living writer on the movies” (John Banville, New Statesman); “Our most argumentative and trustworthy historian of the screen” (Michael Ondaatje)—is the latest edition of The New Biographical Dictionary of Film, which topped Sight & Sound’s poll of international critics and writers as THE BEST FILM BOOK EVER WRITTEN.
3/7

DAVID THOMSON is a regular contributor to The Guardian, The Independent, The New York Times, Movieline, The New Republic, and Salon. He lives in San Francisco.

"The best book on the movies ever written in English." —The New Republic

“Thomson proves anew that he is irreplaceable . . . His monologue has blossomed into an unlikely, searching dialogue about what to value in the movies—how to love what’s come before without nostalgia, and how to find the courage to demand more from the stuff being made right now . . . Deservedly treasured . . . One of the most probing accounts ever written of a human being’s engagement with the movies.” —Sarah Kerr, The New York Times Book Review

“Delicious. One of the best and most useful books written about the movies.” —Edward Guthmann, San Francisco Chronicle

“The Dictionary is not only an indispensable book about cinema, but one of the most absurdly ambitious literary achievements of our time.”  —Geoff Dyer, Sight & Sound

“A marvel . . . Eccentric, audacious, sparkling . . . Probably the greatest living film critic and historian, Thomson writes the most fun and enthralling prose about the movies since Pauline Kael.” —Benjamin Schwarz, The Atlantic

“From Abbott and Costello to Crumb’s Terry Zwigoff, David Thomson expertly caters the banquet of film history in the latest edition of this classic. One critics’ poll called it the best movie book ever; it also has some of the finest, orneriest writing in the English language.”
—Time

“Truly, maddeningly, gloriously subjective . . . Buy this book for a friend, and bask in the pleasure of knowing that you have incalculably enriched his life. Buy it for yourself, and book some quality time with one of the finest writers the story of film has ever had.”
—Saul Austerlitz, San Francisco Chronicle

“[A] mad and magnificent opus . . . Thomson is a great rhapsodist of how film acts on his, and therefore our, imagination. . . . Close viewing, and the insights that spring from rapt attention, are what Thomson’s criticism is all about. Despite its seemingly straitlaced A-to-Z format, the ‘Dictionary’ is oddball and Borgesian, finding imaginative ecstasy in its encyclopedic tendency. The book crackles with epigram while often reaching for meanings that endow familiar subjects with a new reality. . . . It’s an essential, loony, irresistible book, and scarcely a week passes when I don’t submerge myself for an hour or two in its labyrinthine marvels.”
—Richard Rayner, Los Angeles Times

“Essential . . . Razor-sharp reviews are often commentaries on both the filmmaker and the audience. . . . We’re always aware that we’re engaging with a passionate educated human being. Isn’t that more interesting and rewarding than marketing-driven Netflix summaries? Great critics are cinema’s most inspiring enthusiasts. Four stars.”
—Jeffrey Overstreet, Books & Culture

“Witty, expasive, convincing, honest, more than a little mischievous and, so often, absolutely on the money. Thomson’s voice is one of the most distinctive and enjoyable in film criticism. It leaps from the pages of this spruced up classic like flames from a bonfire. . . . Almost every page contains at least one unexpected nugget of information that you would struggle to come across by any other means. . . . However, the real value of this book lies not in facts, but in opinions. Thomson’s views are so shrewd, so exquisitely stated that, more often than not, they feel like thoughts you already held but were never quite sure how to put into words. . .  In a world awash with amateur pundits, the value of a genuine expert who knows his own mind has never been higher. . . . Dip into any entry and you will find irrefutable proof that his gaze remains as sharp as ever. For as long as there are films worth writing about, Thomson’s opinions will remain worth reading.”
—Benjamin Secher, The Telegraph

“The newest edition of David Thomson’s New Biographical Dictionary of Film is 1,076 pages long. It weighs a ton. And yet, it’s almost impossible to put down.”
—The New York Observer

“Skip the movie; read David Thomson instead. Addictive . . . his landmark work. You’ll see how erudite, generous, cheeky, elegant and fascinating Thomson’s writing is. Take any entry and it’s impossible not to want to read to the finish.” —Kyle Smith, New York Post