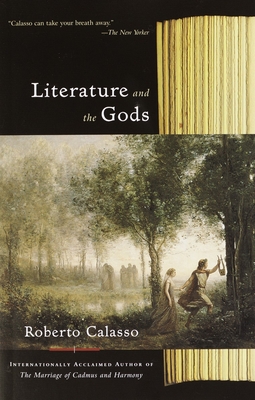 Brilliant, inspired, and gloriously erudite, Literature and the Gods is the culmination of Roberto Calasso’s lifelong study of the gods in the human imagination. By uncovering the divine whisper that lies behind the best poetry and prose from across the centuries, Calasso gives us a renewed sense of the mystery and enchantment of great literature.

From the banishment of the classical divinities during the Age of Reason to their emancipation by the Romantics and their place in the literature of our own time, the history of the gods can also be read as a ciphered and splendid history of literary inspiration. Rewriting that story, Calasso carves out a sacred space for literature where the presence of the gods is discernible. His inquiry into the nature of “absolute literature” transports us to the realms of Dionysus and Orpheus, Baudelaire and Mallarmé, and prompts a lucid and impassioned defense of poetic form, even when apparently severed from any social function. Lyrical and assured, Literature and the Gods is an intensely engaging work of literary affirmation that deserves to be read alongside the masterpieces it celebrates.

"Roberto Calasso's survey of the renewed interest in myth demonstrates how decisive the gods' influence was on modern literature. Calasso is not only immensely learned; he is one of the most original thinkers and writers we have today." —Charles Simic

“Calasso can take your breath away.” –The New Yorker

“[A] riveting work of cultural history. . . . Learned, eloquent, and artful.” –The Weekly Standard

“Luminescent. . . . Stimulating. . . . Seduce[s] a reader in search of ideas that entertain as well as edify.” –Los Angeles Times Book Review