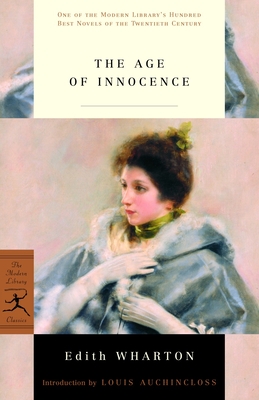 Newland Archer saw little to envy in the marriages of his friends, yet he prided himself that in May Welland he had found the companion of his needs--tender and impressionable, with equal purity of mind and manners. The engagement was announced discreetly, but all of New York society was soon privy to this most perfect match, a union of families and circumstances cemented by affection.
Enter Countess Olenska, a woman of quick wit sharpened by experience, not afraid to flout convention and determined to find freedom in divorce. Against his judgment, Newland is drawn to the socially ostracized Ellen Olenska, who opens his eyes and has the power to make him feel. He knows that in sweet-tempered May, he can expect stability and the steadying comfort of duty. But what new worlds could he discover with Ellen? Written with elegance and wry precision, Edith Wharton's Pulitzer Prize-winning masterpiece is a tragic love story and a powerful homily about the perils of a perfect marriage.

The upper stratum of New York society into which Edith Wharton was born in 1862 provided her with an abundance of material as a novelist but did not encourage her growth as an artist. Educated by tutors and governesses, she was raised for only one career: marriage. But her marriage, in 1885, to Edward Wharton was an emotional disappointment, if not a disaster. She suffered the first of a series of nervous breakdowns in 1894. In spite of the strain of her marriage, or perhaps because of it, she began to write fiction and published her first story in 1889.

Her first published book was a guide to interior decorating, but this was followed by several novels and story collections. They were written while the Whartons lived in Newport and New York, traveled in Europe, and built their grand home, The Mount, in Lenox, Massachusetts. In Europe, she met Henry James, who became her good friend, traveling companion, and the sternest but most careful critic of her fiction. The House of Mirth (1905) was both a resounding critical success and a bestseller, as was Ethan Frome (1911). In 1913 the Whartons were divorced, and Edith took up permanent residence in France. Her subject, however, remained America, especially the moneyed New York of her youth. Her great satiric novel, The Custom of the Country was published in 1913 and The Age of Innocence won her the Pulitzer Prize in 1921.

In her later years, she enjoyed the admiration of a new generation of writers, including Sinclair Lewis and F. Scott Fitzgerald. In all, she wrote some thirty books, including an autobiography. A Backwards Glance (1934). She died at her villa near Paris in 1937.

"Is it--in this world--vulgar to ask for more? To entreat a little wildness, a dark place or two in the soul?"--Katherine Mansfield

"There is no woman in American literature as fascinating as the doomed Madame Olenska. . . . Traditionally, Henry James has always been placed slightly higher up the slope of Parnassus than Edith Wharton. But now that the prejudice against the female writer is on the wane, they look to be exactly what they are: giants, equals, the tutelary and benign gods of our American literature."--Gore Vidal

"Will writers ever recover that peculiar blend of security and alertness which characterizes Mrs. Wharton and her tradition?"--E. M. Forster