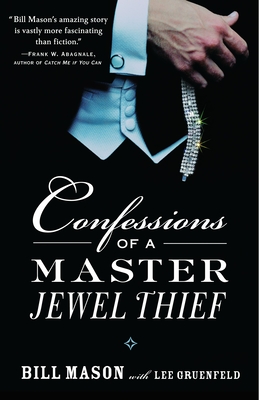 By Bill Mason, Lee Gruenfeld
$17.00
Email or call for price.

The extraordinarily captivating memoir of the remarkable jewel thief who robbed the rich and the famous while maintaining an outwardly conventional life—an astonishing and completely true story, the like of which has never before been told . . . or lived.

Bill Mason is arguably the greatest jewel thief who ever lived. During a thirty-year career he charmed his way into the inner circles of high society and stole more than $35 million worth of fabulous jewels from such celebrities as Robert Goulet, Armand Hammer, Phyllis Diller, Bob Hope, Truman Capote, Margaux Hemingway and Johnny Weissmuller—he even hit the Mafia. Along the way he seduced a high-profile Midwest socialite into leaving her prominent industrialist husband, nearly died after being shot during a robbery, tricked both Christie’s and Sotheby’s into fencing stolen goods for him and was a fugitive for five years and the object of a nationwide manhunt. Yet despite the best efforts of law enforcement authorities from several states as well as the federal government, he spent less than three years total in prison.

Shadowy, elusive and intensely private, Mason has been the subject of many magazine and newspaper features, but no journalist has ever come close to knowing the facts. Now, in his own words and with no holds barred, he reveals everything, and the real story is far more incredible than any of the reporters, detectives or FBI agents who pursued Mason ever imagined. Confessions of a Master Jewel Thief, expertly co-written by bestselling author Lee Gruenfeld, is a unique true-crime confessional.

BILL MASON was perhaps the most successful jewel thief this country has ever known. While working as a real estate manager and investor and raising a family, he excelled in his secret after-hours career. He lives in New York City.

LEE GRUENFELD is the bestselling author of such celebrated novels as The Halls of Justice and All Falls Down. He has also written several novels under the pseudonym Troon McAllister, including the golf classic The Green. He lives in Southern California.

"Confessions of a Master Jewel Thief is a compelling memoir that details a life of crime and a series of gutsy capers rivaling anything that Hollywood could dream up, exploits made all the more astonishing for having been pulled off single-handedly. Bill Mason, a self-described "ordinary guy" who ended up ripping off everyone from Truman Capote to Phyllis Diller to the Mob, insists he's on the straight and narrow now, but his story sure stole a good night's sleep from me. "
—Les Standiford, author of Havana Run and Last Train to Paradise

“I think this book's tremendous. As is always the case, real life, when properly described, is vastly more fascinating than fiction, and you need look no further for proof than Bill Mason's amazing story. "
—Frank W. Abagnale, author of Catch Me If You Can and The Art of the Steal

"Confessions of a Master Jewel Thief is the kind of book that drives crime-fiction writers like me up a wall: No one would ever believe these amazing, compelling stories of theft and deception if they weren't sitting on the nonfiction rack. Mason tells his life story with such flair and confidence that I felt like I was dangling from a twenty-story ledge right along with him. Confessions of a Master Jewel Thief is the ultimate kind of guilty pleasure, because even though you know it's so wrong, it feels so right."
—Eric Garcia, author of Matchstick Men