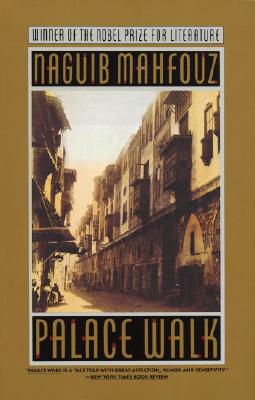 Volume I of the masterful Cairo Trilogy. A national best-seller in both hardcover and paperback, it introduces the engrossing saga of a Muslim family in Cairo during Egypt's occupation by British forces in the early 1900s.

Naguib Mahfouz was born in Cairo in 1911 and began writing when he was seventeen. A student of philosophy and an avid reader, his works range from reimaginings of ancient myths to subtle commentaries on contemporary Egyptian politics and culture. Over a career that lasted more than five decades, he wrote 33 novels, 13 short story anthologies, numerous plays, and 30 screenplays. Of his many works, most famous is The Cairo Trilogy, consisting of Palace Walk (1956), Palace of Desire (1957), and Sugar Street (1957), which focuses on a Cairo family through three generations, from 1917 until 1952. In 1988, he was awarded the Nobel Prize in Literature, the first writer in Arabic to do so. He died in August 2006.

“The alleys, the houses, the palaces and mosques and the people who live among them are evoked as vividly in Mahfouz’s work as the streets of London were conjured up by Dickens.” —Newsweek

“Rich in psychological insight and cultural observation. . . . A majestic and capacious accomplishment.” —The Boston Globe

“A tale told with great affection, humor, and sensitivity, in a style that in this translation is always accessible and elegant.” —The New York Times Book Review