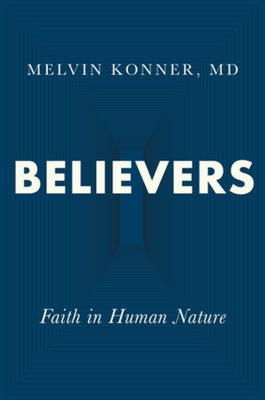 An anthropologist examines the nature of religiosity, and how it shapes and benefits humankind.

Believers is a scientist’s answer to attacks on faith by some well-meaning scientists and philosophers. It is a firm rebuke of the “Four Horsemen”—Richard Dawkins, Daniel Dennett, Sam Harris, and Christopher Hitchens—known for writing about religion as something irrational and ultimately harmful. Anthropologist Melvin Konner, who was raised as an Orthodox Jew but has lived his adult life without such faith, explores the psychology, development, brain science, evolution, and even genetics of the varied religious impulses we experience as a species.

Conceding that faith is not for everyone, he views religious people with a sympathetic eye; his own upbringing, his apprenticeship in the trance-dance religion of the African Bushmen, and his friends and explorations in Christian, Buddhist, Hindu, Muslim, and other faiths have all shaped his perspective. Faith has always manifested itself in different ways—some revelatory and comforting; some kind and good; some ecumenical and cosmopolitan; some bigoted, coercive, and violent. But the future, Konner argues, will both produce more nonbelievers, and incline the religious among us—holding their own by having larger families—to increasingly reject prejudice and aggression.

A colorful weave of personal stories of religious—and irreligious—encounters, as well as new scientific research, Believers shows us that religion does much good as well as undoubted harm, and that for at least a large minority of humanity, the belief in things unseen neither can nor should go away.

Melvin Konner, MD, is Samuel Candler Dobbs Professor in the Department of Anthropology and the Program in Neuroscience and Behavioral Biology at Emory University. He is the author of Believers, Women After All, Becoming a Doctor, and The Tangled Wing, among other books.

Konner [asks]: Why is religion still around? . . . Then, in each of the following lively chapters, he explores an astonishing range of perspectives. . . . [M]arvelously readable. . . . Konner’s Believers offers a terrific running start for anyone who shares his excitement about the questions he raises.

Rather than dismiss or ridicule religious faith, Dr. Konner, an anthropologist and medical doctor, wants to understand it as a fact of human existence....For Dr. Konner...religious affections are a natural, innate human impulse, not a consequence of undesirable and eradicable social pathologies.
— Barton Swaim - Wall Street Journal

An atheistic scientist has written a book that comprehends the color, variety, depth, and value of faith. An exhilarating and inspiring work.
— Rabbi David Wolpe, Sinai Temple, author of David: The Divided Heart

[Believers is] a wonderful book. It is a thoughtful, insightful, and engaging narrative that matters, a lot, right now....A lovely and meaningful book.
— Agustín Fuentes, chair, Department of Anthropology, University of Notre Dame

A humane, appropriately qualified argument that provides aid and comfort for believers—and that should also interest fair-minded nonbelievers.
— Kirkus Reviews

Readers who enjoy the work of Mircea Eliade or Karen Armstrong will find food for thought here.
— Publishers Weekly