The Madwoman and the Roomba: My Year of Domestic Mayhem (Paperback) 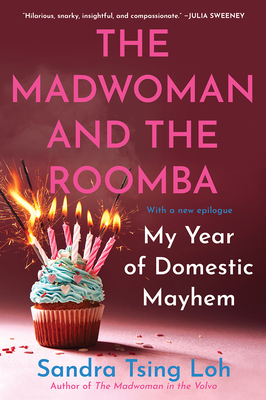 A comic exploration of a year in the life of an “imaginatively twisted and fearless” (Los Angeles Times) best-selling author.

Ah, 55. Gateway to the golden years! Professional summiting. Emotional maturity. Easy surfing toward the glassy blue waters of retirement. . . . Or maybe not? Middle age, for Sandra Tsing Loh, feels more like living a disorganized 25-year-old’s life in an 85-year-old’s malfunctioning body. With raucous wit and carefree candor, Loh recounts the struggles of leaning in, staying lean, and keeping her family well-fed and financially afloat?all those burdens of running a household that still, all-too-often, fall to women.

The Madwoman and the Roomba chronicles a roller coaster year for Loh, her partner, and her two teenage daughters in their ramshackle quasi-Craftsman, with a front lawn that’s more like a rectangle of compacted dirt and mice that greet her as she makes her morning coffee. Her daughters are spending more time online than off; her partner has become a Hindu, bringing in a household of monks; and she and her girlfriends are wondering over Groupon “well” drinks how they got here. Whether prematurely freaking out about her daughters’ college applications, worrying over her eccentric aging father, or overcoming the pitfalls of long-term partnership and the temptations of paired-with-cheese online goddess webinars, Loh somehow navigates the realities of what it means to be a middle-aged woman in the twenty-first century. Including a new epilogue hilariously recounting her family’s quarantine experience during the pandemic, The Madwoman and the Roomba is a “wildly funny” testament to Loh’s “brilliant wit and rock-solid resilience” (Henry Alford).

Sandra Tsing Loh is a writer and performer. Her work has been heard on NPR’s Morning Edition and This American Life. Her book The Madwoman in the Volvo was a New York Times Notable Book of 2014. Loh lives in Pasadena, California.

Loh’s comic appraisal of life at middle age also offers an acerbic reckoning of how the burdens of parenting and housekeeping continue to fall most heavily on women.
— New York Times Book Review

[Loh’s] frank, self-deprecating wit is built on a foundation of acute observation of the ridiculous hypocrisies and foibles that give everyday life its texture.
— Shana Nys Dambrot - LA Weekly

[Sandra Tsing] Loh’s tone is chatty and self-deprecating—like having a glass of wine or a long phone call with your favorite witty, goofy friend.
— Sarah McCraw Crow - BookPage

Hilarious.… [Loh’s] warm, chatty, stream-of-consciousness style will attract book clubs as well as those looking for reassurance that they, too, are doing OK despite unsuccessful stabs at homemaking and dealing with hot flashes.
— Booklist

Loh’s voice is laugh-out-loud hilarious, and her fun house perspective on the foibles of middle age are intelligent and effervescent. Fans of her previous memoir and her NPR program The Loh Down on Science will delight in this outing.

This wildly funny book proves that the more of life’s indignities that are heaped on Sandra Tsing Loh, the more we will thrill to her brilliant wit and rock-solid resilience. I laughed about seventy times, welled up twice, and cried at the end. Spectacular.
— Henry Alford, author of Would It Kill You to Stop Doing That?

If humor will save us from these times—and if not, nothing will—Sandra Tsing Loh should be president. Or, better, queen. I devoured this perceptive, of-the-moment book, about midlife love, work, motherhood, peer pressure, and more, with tears of hilarity running down my face. Sandra Tsing Loh could write an oven manual, and I’d laugh. I think she might be the funniest writer writing today.
— Cathi Hanauer, editor of The Bitch in the House

The Madwoman and the Roomba is so funny it woke up my husband. He couldn’t fall back to sleep with all the cackling, so he told me to read it aloud, and then we were both laughing. It’s a year in the life of a very particular family: Mom wants to write The Angry Divorced Mother’s Cookbook; her live-in boyfriend is more interested in the New York Times’ barbecue recipes than in finding a full-time job; her brother strips to his underwear to give their father’s eulogy.… In other words, they’re just like the rest of us: trying to get by without killing each other. Do you like laughing? Do you like reading? Buy this book!