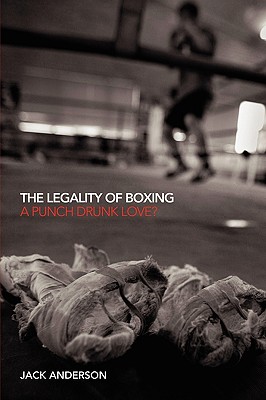 The first book of its kind dedicated to an assessment of the legality of boxing, The Legality of Boxing: A Punch Drunk Love? assesses the legal response to prize fighting and undertakes a current analysis of the status of boxing in both criminal legal theory and practice.

In this book, Anderson exposes boxing's 'exemption' from contemporary legal and social norms. Reviewing all aspects of boxing - historical, legal, moral, ethical, philosophical, medical, racial and regulatory - he concludes that the supposition that boxing has a (consensual) immunity from the ordinary law of violence, based primarily on its social utility as a recognised sport, is not as robust as is usually assumed.

suggests that the sport is extremely vulnerable to prosecution and might in fact already be illegal under English criminal law outlines the physical and financial exploitation suffered by individual boxers both inside and outside the ring, suggesting that standard boxing contracts are coercive thus illegal and that boxers do not give adequate levels of informed consent to participate advocates a number of fundamental reforms, including possibly that the sport will have to consider banning blows to the head proposes the creation of a national boxing commission in the US and a similar entity in the United Kingdom, which together would attempt to restore the credibility of a sport long know as the red-light district of sports administration.

An excellent book, it is a must read for all those studying sports law, popular culture and the law and jurisprudence.

Jack Anderson lectures in the School of Law at Queen's University, Belfast.