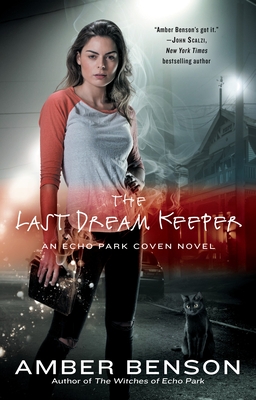 This is book number 2 in the An Echo Park Coven Novel series.

In the second Witches of Echo Park novel, one coven must keep the world in balance and stand against a rising darkness.

Lyse MacAllister did not step into an easy role when she took over as master of the Echo Park coven of witches after her great-aunt Eleanora’s death. As she begins to forge the bonds that will help her lead her sisters, she struggles to come to terms with her growing powers. And she soon faces a deadly new threat. A group of fanatics intent on bringing about the end of times has invaded the witches Council—but the Council is turning a blind eye to the danger growing in its midst.

Only one witch is prophesied to be able to stop the encroaching darkness. And if Lyse and her blood sisters are to have any chance at protecting all we know from being lost forever, they must keep her safe—no matter what the cost…

AMBER BENSON cocreated, cowrote, and directed the animated supernatural Web series Ghosts of Albion with Christopher Golden, which they followed with a series of novels, including Witchery and Accursed, and the novella Astray. Benson and Golden also coauthored the novella The Seven Whistlers. As an actress, she has appeared in dozens of roles in feature films, TV movies, and television series, including the fan-favorite role of Tara Maclay on three seasons of Buffy the Vampire Slayer. Benson wrote, produced, and directed the feature films Chance and Lovers, Liars and Lunatics.

Praise for The Witches of Echo Park

“Great characters, great story, great setting—Amber Benson’s got it. Get it for yourself.”— John Scalzi, New York Times bestselling author of Lock In

“The Witches of Echo Park is dark, thoughtful urban fantasy about destiny, the ties that bind us, and the power of women who rely on themselves—and each other—for strength. A fantastic read.”—Christopher Golden, #1 New York Times bestselling author of King of Hell