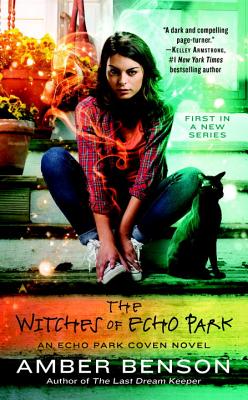 This is book number 1 in the An Echo Park Coven Novel series.

First in a “spellbinding”* series about a coven of witches living in L.A., from Amber Benson, author of the Calliope Reaper-Jones novels.

Unbeknownst to most of humankind, a powerful network of witches thrives within the shadows of society, using magic to keep the world in balance. But the witches are being eliminated—and we will all pay if their power falls…

When Lyse MacAllister’s great-aunt Eleanora, the woman who raised her, becomes deathly ill, Lyse puts her life in Georgia on hold to rush back to Los Angeles. And once she returns to Echo Park, Lyse discovers her great-aunt has been keeping extraordinary secrets from her.

Not only is Lyse heir to Eleanora’s Victorian house; she is also expected to take her great-aunt’s place in the Echo Park coven of witches. But accepting her destiny means placing herself in deadly peril—for the world of magic is under siege, and the battle the witches now fight may be their last…

Amber Benson is the author of the Echo Park Coven Novels and the Calliope Reaper-Jones Novels. She cocreated, cowrote, and directed the animated supernatural Web series Ghosts of Albion with Christopher Golden, which they followed with a series of novels, including Witchery and Accursed, and the novella Astray. Benson and Golden also coauthored the novella The Seven Whistlers. As an actress, she has appeared in dozens of roles in feature films, TV movies, and television series, including the fan-favorite role of Tara Maclay on three seasons of Buffy the Vampire Slayer. Benson wrote, produced, and directed the feature films Chance and Lovers, Liars and Lunatics.

“[An] urban fantasy series that deftly mixes magic and the modern world.”—Publishers Weekly