Improv Nation: How We Made a Great American Art (Hardcover) 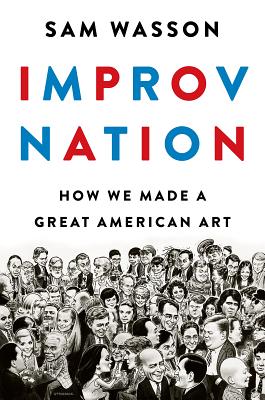 A Finalist for the 2017 George Freedley Memorial Award

“With Saturday Night Live looming ever larger in the pop culture landscape, it’s time for a history of improv comedy. Wasson delivers, moving nimbly from improv’s origins in 1950s Chicago to movies like Caddyshack and TV shows like The Colbert Report.” —Entertainment Weekly


From the best-selling author of Fosse, a sweeping yet intimate—and often hilarious—history of a uniquely American art form that has never been more popular.

At the height of the McCarthy era, an experimental theater troupe set up shop in a bar near the University of Chicago. Via word-of-mouth, astonished crowds packed the ad-hoc venue to see its unscripted, interactive, consciousness-raising style. From this unlikely seed grew the Second City, the massively influential comedy theater troupe, and its offshoots—the Groundlings, Upright Citizens Brigade, SNL, and a slew of others.
Sam Wasson charts the meteoric rise of improv in this richly reported, scene-driven narrative that, like its subject, moves fast and digs deep. He shows us the chance meeting at a train station between Mike Nichols and Elaine May. We hang out at the after-hours bar Dan Aykroyd opened so that friends like John Belushi, Bill Murray, and Gilda Radner would always have a home. We go behind the scenes of landmark entertainments from The Graduate to Caddyshack, The Forty-Year Old Virgin to The Colbert Report. Along the way, we commune with a host of pioneers—Mike Nichols and Harold Ramis, Dustin Hoffman, Chevy Chase, Steve Carell, Amy Poehler, Alan Arkin, Tina Fey, Judd Apatow, and many more. With signature verve and nuance, Wasson shows why improv deserves to be considered the great American art form of the last half-century—and the most influential one today.

SAM WASSON is the author of five books including the best-selling Fosse and Fifth Avenue, 5 AM: Audrey Hepburn, Breakfast at Tiffany’s, and the Dawn of the Modern Woman. He lives in Los Angeles.

“Improv Nation masterfully tells a new history of American comedy . . . Wasson masters the art of the monograph by locating a sharp argument within a sweeping, messy, compelling history . . . Wasson’s dizzying style drives the point home. Though he jumps around, he never gives a player short shrift, and his conversational tone captivates. The book’s focus tightens as its narrative strands converge, but it maintains a loose unpredictability throughout. It holds the element of surprise — true to the spirit of its subject. Grade: A-” —Entertainment Weekly

"Sam Wasson's Improv Nation examines one of the most important stories in American popular culture . . . Wasson may be the first author to explain [improv’s] entire history in comprehensive detail. For that reason alone, it’s a valuable book, benefiting from dogged reporting and the kind of sweeping arguments that get your attention."—New York Times Book Review

“[A] winning history of the subject . . . [Wasson] makes fine use of improv as a prism for understanding the development of American comedy, and it’s a pleasure to encounter his acute characterizations." —Wall Street Journal

"In his studious but breezy book, Improv Nation: How We Made a Great American Art, author Sam Wasson tracks the relatively young craft of creating humor in the same time it took Neil Simon to sharpen a pencil, making readers feel like they’re sweating on stage with its quick-witted practitioners. Like the best of his subjects, which include Stephen Colbert, Bill Murray and Tina Fey, Wasson has perfect timing . . . Wasson has assembled a loving tribute to one of entertainment’s most daunting challenges, with lots of laughs to boot."—Minneapolis Star-Tribune

"A fast-paced, thoroughly engaging road map of how improv — that rapid-fire art of entirely unscripted performance — came to infiltrate and shape the American pop-culture landscape . . . A whirlwind of quick, sharp anecdotes, never lingering too long yet still giving the reader a full sense of the people and the history shaping improv into what it is today." —Seattle Times

“With Saturday Night Live looming ever larger in the pop culture landscape, it’s time for a history of improv comedy. Wasson delivers, moving nimbly from improv’s origins in 1950s Chicago to movies like Caddyshack and TV shows like The Colbert Report.”—Entertainment Weekly, Fall's 20 Must-Read Books

"Wasson makes a thoroughly entertaining case that improvisational comedy has 'replaced jazz as America’s most popular art' and represents the best of democracy . . . Wasson brilliantly weaves together the disparate strands of improv’s first decade . . . [and] nicely foreshadows future events and collaborations and does an admirable job of making simultaneous events easy to follow . . . In the spirit of an improv performer, Wasson takes care to never let the stars take over the show."—Publishers Weekly, (starred review)

"Wasson, author of the stellar biography Fosse (2013), brings his spellbinding prose style to this history of improvisational comedy . . .  There’s a natural flow to the author’s writing—a conversational tone and a way of capturing our interest that transforms what could have been a dry recitation of people, places, and facts into a compelling, absolutely unputdownable story . . . And, in case you’re wondering, yes, the book is funny. In places, very funny. A remarkable story, magnificently told."—Booklist, (starred review)

“A refreshing look at the ways in which comedians, artists, writers, and actors started getting involved in improvisation . . .  An entertaining book, recommended for aspiring comedians who want to historicize their practice.”—Kirkus

"The perfect gift for extreme comedy nerds and students of the craft."—HelloGiggles