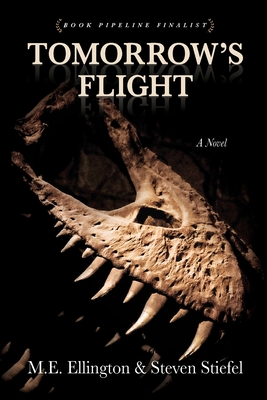 For the passengers and crew, American Cruise Airlines Flight 839 was supposed to be a routine red-eye. But destiny often changes people's lives in ways they can't imagine.
When a dinosaur fossil is unearthed in the central Nevada desert, the last thing Andrea Alejandro, a graduate student in paleontology, expected to find was the tail section of an airplane in the same strata of earth.
After Flight 839 crash lands in unfamiliar terrain, Sarah documents the daily routine she and her fellow passengers follow, waiting to be saved. Slowly but surely the survivors come to realize that they have crossed through time. The daily horrors of Cretaceous life become clearer as they encounter a family of Tyrannosaurus rexes that grows increasingly interested in the survivors and their shell of an airplane.
As timelines collide, one woman's battle for survival becomes another woman's fight for the truth. Tomorrow's Flight is the new novel from Amazon bestselling authors M.E. Ellington and Steven Stiefel.