The Late Americans: A Novel (Hardcover) 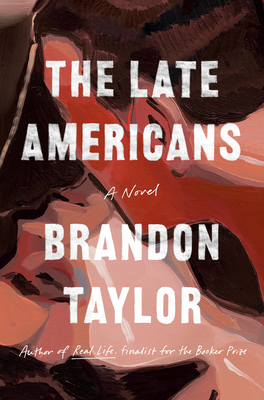 In the shared and private spaces of Iowa City, a loose circle of lovers and friends encounter, confront, and provoke one another in a volatile year of self-discovery. At the group’s center are Ivan, a dancer turned aspiring banker who dabbles in amateur pornography; Fatima, whose independence and work ethic complicates her relationships with friends and a trusted mentor; and Noah, who “didn’t seek sex out so much as it came up to him like an anxious dog in need of affection.” These three are buffeted by a cast of poets, artists, landlords, meat-packing workers, and mathematicians who populate the cafes, classrooms, and food-service kitchens of Iowa City, sometimes to violent and electrifying consequence. Finally, as each prepares for an uncertain future, the group heads to a cabin to bid goodbye to their former lives—a moment of reckoning that leaves each of them irrevocably altered.

A novel of intimacy and precarity, friendship and chosen family, The Late Americans is Brandon Taylor’s richest and most involving work of fiction to date, confirming his position as one of our most perceptive chroniclers of contemporary life.

Brandon Taylor is the author of the novel Real Life, which was shortlisted for the Booker Prize and the National Book Critics Circle John Leonard Prize, and named a New York Times Book Review Editors’ Choice and a Science + Literature Selected Title by the National Book Foundation. His collection Filthy Animals, a national bestseller, was awarded The Story Prize and shortlisted for the Dylan Thomas Prize. He is the 2022-2023 Mary Ellen von der Heyden Fellow at the Dorothy and Lewis B. Cullman Center for Scholars and Writers.

Advance praise for The Late Americans:

“Brandon Taylor writes with such precision and perception that reading his work is an immersive experience: you inhabit his characters, you share their nerve endings. The Late Americans is a brilliant and electrifying symphony of a novel. I loved it.”  —Lily King, author of Writers & Lovers and Euphoria

“The Late Americans is a dizzying plunge into the lives of young people making art in America in the era of survival capitalism, grappling over the big questions like they’re fighting over a gun. Deep within their ambitions, their pettiness and lust, is the meaning and even grandeur they seek—and whether or not his characters ever find it, Brandon Taylor has. A bravura performance on the edge of a knife.” —Alexander Chee, author of How to Write an Autobiographical Novel

“Taylor is a sharp chronicler of the body. In The Late Americans, the body is an instrument and an archive, vulnerable to the complicated violence of pleasure and work.” —Raven Leilani, author of Luster

“Brandon Taylor’s characters in The Late Americans are obsessed with art, money, integrity, success, survival—and with one another. They can be deliciously catty, but they’re also desperate to be loved. And repulsed by that desperation. They are, in a word, human. Taylor realizes each character so fully, with such enviable—and often hilarious—granularity, that it's hard not to feel like I know these people, that I could pick up my phone right now and call any of them. It’s the best kind of magic, this book. I’m already rereading it.” —Kaveh Akbar, author of Calling a Wolf a Wolf and Pilgrim Bell

“Taylor has a talent for taking the dull hum of quotidian life and converting it into lyrics.” —John Paul Brammer, New York Times Book Review

“Taylor [is] a brilliantly inventive storyteller, and one whose beautifully drawn characters have that rare ability to really make you care.” —Vogue

“While Taylor is a gifted descriptive writer, it’s the way he gets into his characters’ heads in the moment and in the aftermath—the confusion, the anger, the longing—that’s so hard to shake.” —Vanity Fair

“With a stark and unwavering eye and a deep respect for his subjects, Taylor builds instantly recognizable tales of longing and desire.” —Elle