Uncle of the Year: & Other Debatable Triumphs (Hardcover) 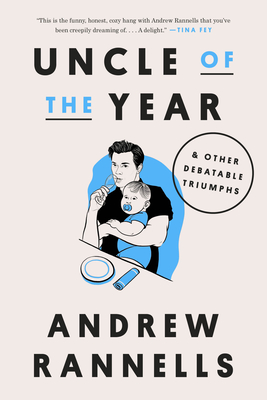 Candid, hilarious essays from the star of The Book of Mormon and Girls on anxiety, ambition, and the uncertain path to adulthood, which ask, How will we know when we get there?

In Uncle of the Year, Andrew Rannells wonders: If he, now in his forties, has everything he’s supposed to need to be an adult—a career, property, a well-tailored suit—why does he still feel like an anxious twenty-year-old climbing his way toward solid ground? Is it because he hasn’t won a Tony, or found a husband, or had a child? And what if he doesn’t want those things? (A husband and a child, that is. He wants a Tony.)

In deeply personal essays drawn from his life, as well as his career on Broadway and in Hollywood, Rannells argues that we all pretend we are constantly succeeding—for friends, partners, parents, and others—in the process known as “adulting.” But if this acting is leaving us unfulfilled, then we need new markers of time, new milestones, new expectations of what adulthood is and can be.

Along the way, Rannells navigates dating, aging, mental health, bad jobs, and much more. In his essay “Uncle of the Year,” he explores the role that children play in his life, as a man who never thought having kids was necessary or even possible—until his siblings have kids and he falls in love with a man with two of his own. In “Always Sit Next to Mark Ruffalo,” he reveals the thrills and absurdities of the awards circuit, and the desire to be recognized for one’s work. And in “Horses, Not Zebras,” he shares the piece of wisdom that helped him finally come to terms with his anxiety and perfectionism.

Filled with honest insights and a sharp wit, Uncle of the Year challenges us to take a long look at who we’re pretending to be, who we know we are, and who we want to become.

Andrew Rannells is an actor, a singer, and the author of Too Much Is Not Enough. A Tony, Drama Desk, and Critics Choice nominee and Grammy winner, he has starred in The Book of Mormon, Hedwig and the Angry Inch, Hamilton, Falsettos, The Boys in the Band, and Tammy Faye. On the small screen, he has appeared in Girls, The New Normal, Big Mouth, Black Monday, and Girls5eva. Rannells’s film credits include A Simple Favor, The Boys in the Band, and The Prom. His writing has appeared in The New York Times, and he made his directorial debut adapting one of his Modern Love essays for the screen.

“If Andrew Rannells has not already won you over on the stage and screen, then he certainly will with Uncle of the Year: It’s like sitting beside a charmer who keeps filling your glass with champagne. Rannells is a raconteur extraordinaire. Funny, moving, insightful, the memories and commentary keep sparkling long after you’ve closed the book. It’s just what we all need right now.”—Andrew Sean Greer, Pulitzer Prize–winning author of Less Is Lost

“With Uncle of the Year, Andrew Rannells continues his hot streak as one of the wisest, most tender, and funniest writers of our generation. With the unsparing eye of David Sedaris and the social wisdom of Nora Ephron, he tackles the most foundational questions of growing up (and up and up) with a sweetness that also makes you laugh (literally) out loud. His ability to encompass the experience of finding your own version of adulthood will comfort, amuse, and demand that you return time and time again, finding something new with every read.”—Lena Dunham

“Reading Andrew Rannells’s beautiful, hilarious, and touching essay collection, Uncle of the Year, is like hanging out with the best friend of your dreams without ever having to take off your sweatpants and leave the house.”—Casey Wilson

“Mystic Pizza, couples therapy, the anxiety of birthdays, and Miss Saigon: How is it possible for a single collection of essays to speak so directly to my interests? Rannells’s writing is sharp, funny, and honest; he offers tremendous insight into how our biggest failures not only make for the best stories but are also invaluable to who we are. This is a book for anyone who has ever stared at the ceiling and wondered how—and when and if—they managed to become an adult.”—Grant Ginder, author of The People We Hate at the Wedding and Let’s Not Do That Again

“Someone as talented as Andrew Rannells has no right to be such a good writer. But then you read his witty, poignant, and honest essays in Uncle of the Year, and it is clear why Rannells is not only beloved as an actor, writer, and singer but also as a human being.”—Nick Kroll

“Endearing . . . Rannells has a gift for writing genuinely funny prose, and he has a way with self-deprecation. . . . Winningly snarky, well-written essays on life, love, and celebrity.”—Kirkus Reviews