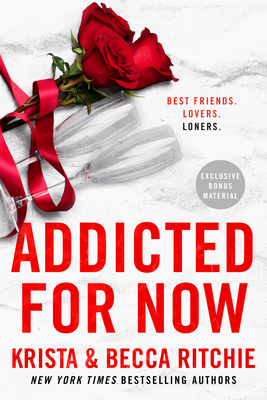 This is book number 3 in the ADDICTED SERIES series.

The TikTok sensation Addicted series continues with Addicted For Now, now in a print edition with special bonus material!

Those are the three words Lily Calloway fears the most. But Loren Hale is determined to be with Lily without enabling her dangerous compulsions. With their new living situation—sleeping in the same bed, for real, together—Lily has new battles. Like not jumping Lo's bones every night. Not being consumed by sex and his body.

Loren plans to stay sober, to right all of his wrongs. So when someone threatens to expose Lily's secret to her family and the public, he promises that he'll do anything to protect her. But with old enemies surfacing, Lo has more at stake than his sobriety.

And his worst fear isn't relapsing. He hears the end. He sees it. The one thing that could change everything. Just three words.

​​Krista and Becca Ritchie are New York Times and USA Today bestselling authors and identical twins—one a science nerd, the other a comic book geek—but with their shared passion for writing, they combined their mental powers as kids and have never stopped telling stories. They love superheroes, flawed characters, and soul mate love.