One Bullet Away: The Making of a Marine Officer (Paperback) 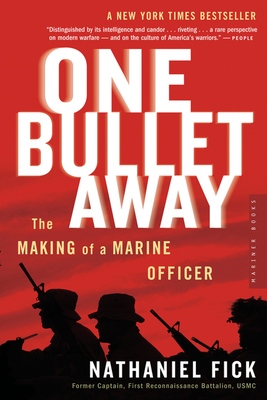 The New York Times bestseller that “provides a close-up and often harrowing look at Fick’s service both in Iraq and Afghanistan” (US News & World Report).

If the Marines are “the few, the proud,” Recon Marines are the fewest and the proudest. Nathaniel Fick’s career begins with a hellish summer at Quantico, after his junior year at Dartmouth. He leads a platoon in Afghanistan just after 9/11 and advances to the pinnacle—Recon— two years later, on the eve of war with Iraq. His vast skill set puts him in front of the front lines, leading twenty-two Marines into the deadliest conflict since Vietnam. He vows to bring all his men home safely, and to do so he’ll need more than his top-flight education. Fick unveils the process that makes Marine officers such legendary leaders and shares his hard-won insights into the differences between military ideals and military practice, which can mock those ideals.

In this deeply thoughtful account of what it’s like to fight on today’s front lines, Fick reveals the crushing pressure on young leaders in combat. Split-second decisions might have national consequences or horrible immediate repercussions, but hesitation isn’t an option. One Bullet Away never shrinks from blunt truths, but ultimately it is an inspiring account of mastering the art of war.

“Fick’s writing style sets this book apart from other accounts of recent conflicts and guarantees One Bullet Away a place in the war memorial hall of fame.”—USA Today

After receiving a BA in classics from Dartmouth, Nathaniel Fick served as an infantry oficer and then as an elite Recon Marine. He saw action in Afghanistan and Iraq before leaving the Corps as a captain. He is now a Fellow at the Center for a New American Security in Washington, D.C. He is the author of the New York Times bestseller ONE BULLET AWAY. Fick is a member of the Council on Foreign Relations and the International Institute of Strategic Studies, and serves as a Director of the Marine Corps Scholarship Foundation and the Rockefeller Center for Public Policy at Dartmouth College. He holds a B.A. from Dartmouth, an MBA from the Harvard Business School, and an MPA in international security policy from Harvard's John F. Kennedy School of Government.

"Fick's writing style sets this book apart from other accounts of recent conflicts and guarantees One Bullet Away a place in the war memorial hall of fame." USA Today

"What One Bullet Away accomplishes, in a way all the blather on cable TV never will, is to give readers real insights into the modern war and its warriors." --Rocky Mountain News

"Fick makes a fascinating contribution to the growing shelf of soldiers' tales with his insight into the minds of today's young officers." Boston Magazine

"Provides a close-up and often harrowing look at [his] service both in Iraq and Afghanistan." U.S. News & World Report

"Much more than a simple dispatch from the fronts of Afghanistan and Iraq, One Bullet Away finds Nathaniel Fick reaching deep within his heart and soul. culling up the irony, frustration, humor, tragedy, and -- more than anything else -- the pathos that informs the enterprise of war." --Military.com

"Rapid-fire, vertiginous . . . Fick brilliantly evokes the split second before the first muzzle flashes of an ambush...His story is truly -- as one Marine motto has it -- leadership by example." --National Review

"A compelling and exciting memoir of military service, swift in its pacing and sure in its details. The courage, selflessness, and skill of Marines are intensely portrayed here and are -- in the highest and rarest praise for a military memoir -- unmistakably authentic." --Senator John McCain

"Nathaniel Fick shares a powerful account of the bravery of the Marines and the simple truth every soldier shares: that war is hell. Our troops on the ground in Iraq and Afghanistan are heroes who have sacrificed to serve our country, and in these pages we are reminded of their courage under fire. Fick's story is testimony to their struggle." --Senator John Kerry

"A splendid story of a young Marine officer's journey from a promising begining to the truth and horror of combat. He pulls no punches in a book that is hard to put down." --Joseph L. Galloway, coauthor of We Were Soldiers Once . . . and Young

"This is the war on terrorism at the working level, where it's very cold or very hot, where you're dirty and you don't get much sleep, and your life can be over in the next breath. Washington poobahs do grand strategy; people like Fick do the work. This is their story of the fighting in Afghanistan and Iraq. Fick's book makes those wars become real, with all the heroism and the mistakes that still come with ground combat." --Richard A. Clarke, author of Against All Enemies

"A superb account of the challenges that confront a young officer in today's conflicts. Fick offers exceptionally vivid descriptions of leadership, duty, and brotherhood under fire. One Bullet Away is brilliant, a must-read for anyone who wants to truly understand what our troops face." --General Anthony C. Zinni, USMC (ret.), former commander in chief, U.S. Central Command, and coauthor of Battle Ready

"A brilliant, no-bullshit piece of under-the-helmet reporting. One Bullet Away is much more than a chronicle of war. It illuminates a man's mind and heart as he is thoroughly transformed by training and combat." --Steven Pressfield, author of Gates —